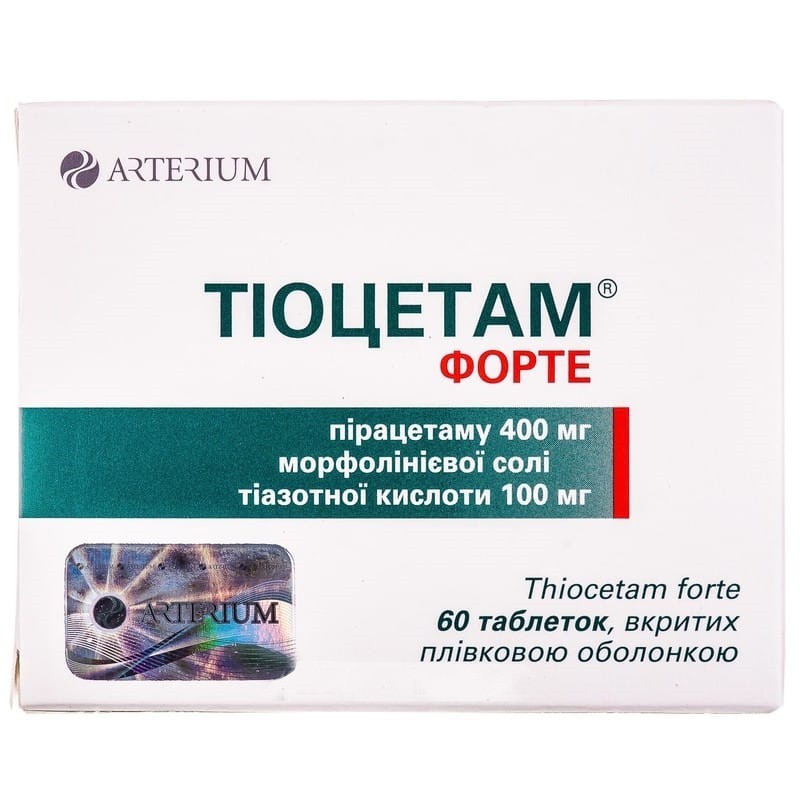 For medical use of the drug

Basic physico-chemical properties: tablets, film-coated yellow, oval, with a risk on one side of the tablet. A white core is visible on the fault.

The drug belongs to the group of cerebroactive drugs, has anti-ischemic, antioxidant, membrane-stabilizing and nootropic properties.

The drug improves the integrative and cognitive activity of the brain, increases the effectiveness of the learning process, helps to eliminate the symptoms of amnesia, and increases indicators of short-term and long-term memory.

The pharmacological effect of the drug is due to the mutually potentiating effect of thiazoic acid and piracetam.

The drug is able to accelerate the oxidation of glucose in the reactions of aerobic and anaerobic oxidation, normalize bioenergy processes, increase ATP level, stabilize metabolism in brain tissues.

The drug inhibits the formation of reactive oxygen species, reactivates the antioxidant enzyme system, especially superoxide dismutase, inhibits free radical processes in the brain tissue during ischemia, improves blood rheological properties due to the activation of the fibrinolytic system, stabilizes and reduces, respectively, areas of necrosis and ischemia.

It is well absorbed by internal use, penetrates into various organs and tissues, including brain tissue. The drug crosses the placental barrier.

Each component of the drug is metabolized separately. Piracetam is practically not metabolized in the body and excreted in the urine. The elimination half-life is 4-8 hours. Morpholinium salt of thiazoic acid after oral administration is rapidly absorbed, its absolute bioavailability is 53%. The maximum concentration in the blood plasma is reached 1.6 hours after a single dose of 200 mg. The half-life is about 8 hours.

Hypersensitivity to piracetam or pyrolidone derivatives, and / or thiazoic acid, as well as to any other component of the drug.

The terminal stage of renal failure.

Interaction with other drugs and other types of interactions.

Thiocetam forte should not be prescribed with drugs that have an acidic pH.

Due to the presence of piracetam, the following types of interaction are possible:

In patients with severe recurrent thrombosis, the use of piracetam in high doses (9.6 g / day) did not affect the dosage of acenocoumarol to achieve a prothrombin time (INR) of 2.5-3.5, but with simultaneous use, a significant decrease in the level of aggregation was noted platelets, fibrinogen levels, Willibrandt factors (VIII: C; VIII: vW: Ag; VIII: vW: Rco), blood and plasma viscosity.

The probability of changing the pharmacodynamics of piracetam under the influence of other drugs is low, since 90% of the drug is excreted unchanged in the urine.

At a concentration of 1422 μg / ml, slight inhibition of CYP2A6 (21%) and 3A4 / 5 (11%) was noted. However, the Ki level of these two CYP isomers is sufficient if 1422 μg / ml is exceeded. Therefore, metabolic interaction with drugs that undergo biotransformation by these enzymes is not possible. Antiepileptic drugs.

The use of piracetam at a dose of 20 mg / day for 4 weeks or more did not change the concentration level curve and the maximum concentration (Cmax) of antiepileptic drugs in blood serum (carbamazepine, phenytoin, phenobarbital, sodium valproate) in patients with epilepsy.

Concomitant use with enalapril, captopril increases the risk of adverse reactions from the cardiovascular system.

Features of the application.

With caution, it is necessary to take the drug for elderly people who suffer from cardiovascular pathology, since adverse reactions in this group are noted more often.

Allergic reactions are more common in people prone to allergies.

Effect on platelet aggregation. Due to the fact that piracetam reduces platelet aggregation, it is necessary to prescribe the drug with caution to patients with impaired hemostasis, conditions that may be accompanied by hemorrhages (gastrointestinal ulcer), during significant surgeries (including dental interventions), and patients with severe symptoms bleeding or a patient with a history of hemorrhagic stroke; patients who use anticoagulants, platelet antiplatelet agents, including low doses of acetylsalicylic acid. The drug is excreted by the kidneys, so special attention should be paid to patients with renal failure.

Elderly patients. With prolonged therapy in elderly patients, regular monitoring of renal function indicators is recommended, if necessary, the dose should be adjusted depending on the results of a study of creatinine clearance.

The drug contains lactose as an excipient, which should be considered in patients with galactose intolerance, lactase deficiency or impaired glucose / galactose absorption.

1 tablet of Thiocetam Forte contains 0.007 g of powdered sugar, which should be considered in patients with diabetes mellitus.

Use during pregnancy or lactation.

The ability to influence the reaction rate when driving with other mechanisms.

It is not recommended to use the drug when driving vehicles and working with mechanisms that require increased attention, due to the risk of the development of possible adverse reactions from the nervous system.

The dosage and duration of treatment is determined by the doctor in each individual case separately, depending on the nature and course of the disease.

In transient and chronic cerebrovascular disorders and in the rehabilitation period after ischemic stroke, 1 tablet 3 times a day for 25-30 days.

Prescribe Thiocetam Forte tablets 30 minutes before meals. The course of treatment is from 2-3 weeks to 3-4 months.

For the treatment of diabetic encephalopathy, prescribe 1 tablet 3 times a day for 45 days.

When used in therapeutic doses, an overdose is not possible.

If you deviate from the doses prescribed by the doctor, it is possible that side effects of the drug may arise and intensify (agitation, sleep disturbance, dyspeptic phenomena). In these cases, reduce the dose of the drug and prescribe symptomatic treatment (induce vomiting, rinse the stomach).

With an overdose in the urine, the concentration of sodium and potassium increases. In such cases, the drug must be discontinued.

With the clinical use of the drug thiocetam forte, there may be cases of adverse reactions:

from the vestibular system: dizziness.

Patients may develop adverse reactions caused by individual components of the drug:

from the blood and lymph: hemorrhagic disorders;

on the part of the organs of hearing and the labyrinth: dizziness;

on the part of the skin and subcutaneous tissues: angioedema, dermatitis, rashes, urticaria, itching;

from the reproductive system and lactation: increased sexual activity;

on the part of the skin and subcutaneous tissue: itching, flushing of the skin, rash, urticaria, angioedema;

from the immune system: anaphylactic shock;

from the central and peripheral nervous system: dizziness, tinnitus;

from the respiratory system: shortness of breath, suffocation;

The product contains dye yellow sunset FCF (E 110), which can cause allergic reactions.

In the original packaging at a temperature not exceeding 25 ° C. Keep out of the reach of children.

The location of the manufacturer and the address of the place of business.