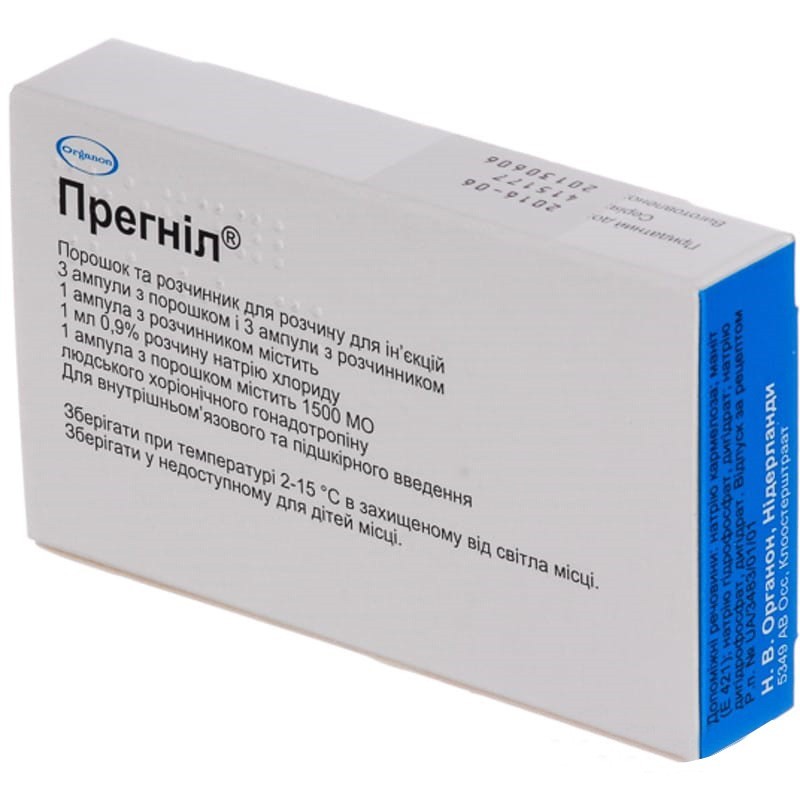 Pregnyl contains human chorionic gonadotropin (hhg) with lh activity. lg is necessary for normal growth and maturation of gametes in men and women, as well as for the production of sex steroid hormones.

In men, Pregnil is prescribed to stimulate Leydig cells to enhance testosterone production.

Pharmacokinetics Cmax hCG in blood plasma in men is achieved approximately 6 and 16 hours after a single i / m or s / c injection, and in women after approximately 20 hours. Despite such a high intersubject variability, changes after i / m administration may be due to a greater thick subcutaneous fat in the gluteal region in women compared with men. hCG is metabolized to 80% mainly in the kidneys. It was revealed that i / m or s / h administration of hCG is bioequivalent with respect to the degree of absorption and controlled T½approximately 33 hours. Given the recommended dosage regimens and duration T½cumulation is not expected.

In men: hypogonadotropic hypogonadism (also cases of idiopathic dyspermia, in which a positive response to gonadotropins is noted). Delayed sexual development due to insufficiency of the pituitary gonadotropic function. Cryptorchidism not caused by anatomical obstruction.

The Pregnyl solution obtained by adding the solvent to the lyophilized active substance is administered intramuscularly or subcutaneously slowly. since the started ampoule cannot be sealed again in such a way as to further guarantee sterility of the contents, the solution must be used immediately after preparation.

Dose for women. Stimulation of ovulation with reduced reproductive ability due to lack of ovulation or impaired egg maturation and preparation of eggs for puncture during controlled ovarian hyperstimulation (in ART programs). Typically, 1 injection is 5,000-10,000 IU of Pregnil to complete treatment with drugs containing FSH.

Luteal phase support - 2-3 consecutive injections of Pregnyl at a dose of 1000-3000 IU each for 9 days after ovulation or transplantation of the embryo (for example, on the 3rd, 6th and 9th day after stimulated ovulation).

Hypogonadotropic hypogonadism. Pregnyl is prescribed at 1000–2000 IU 2-3 times a week.

In case of male infertility due to insufficiency of spermatogenesis, Pregnil can be prescribed in combination with FSH 2-3 times a week for at least 3 months until spermatogenesis improves. For the period of this treatment, it is necessary to temporarily discontinue testosterone replacement therapy. Sometimes, only hCG is sufficient to maintain the improvement achieved.

Delayed sexual development associated with insufficient production of gonadostopin by the pituitary gland. Pregnil is used at a dose of 1500 IU 2-3 times a week for at least 6 months.

Immune system disorders: in some cases, a generalized rash, fever may occur.

Disruption of metabolism and nutrition: after the introduction of high doses, a delay in water and sodium is sometimes noted, which is considered the result of excessive production of androgens.

Disorders from the reproductive system and mammary glands: hCG therapy in rare cases can cause gynecomastia.

Among women. with pregnancy following the induction of ovulation with gonadotropic drugs, the risk of multiple pregnancy increases; after adjuvant hormonal therapy - the risk of miscarriage; with pipe pathology - the risk of ectopic pregnancy (therefore, it is important to confirm the presence of an intrauterine pregnancy using an ultrasound scan). The rate of abortion in women using ART is higher than in the general population. it is also necessary to exclude the presence of uncontrolled non-gonadal endocrinopathy (for example, dysfunction of the thyroid gland, adrenal gland or pituitary gland).

The frequency of congenital malformations after ART may be slightly higher than after spontaneous conceptions. It is believed that this frequency is associated with differences in parental parameters (maternal age, sperm characteristics) and a high incidence of multiple pregnancy after ART. There is no evidence that the use of gonadotropins with ART is associated with an increased risk of congenital malformations.

Women with generally accepted risk factors for thrombosis, such as personal or family history, severe obesity (body mass index 30 kg / m2) or thrombophilia, have an increased risk of venous or arterial thromboembolic complications during or after treatment with gonadotropins. For such women, positive ART results must be weighed against risks. It should be noted that pregnancy itself carries an increased risk of thrombosis.

Pregnil should not be used to reduce body weight. hCG does not affect fat metabolism, fat distribution or appetite.

In men. Treatment of hCG leads to an increase in the production of androgens, therefore, patients with latent or severe heart failure, impaired renal function, increased blood pressure, epilepsy or migraine (a history of these diseases) should be under the constant supervision of a doctor, since sometimes an increase in androgen production can cause a worsening of the condition or relapse of the disease.

During pregnancy and breastfeeding. Pregnil can be used to support the luteal phase, but you should not continue taking the drug later in pregnancy. Pregnil cannot be used during lactation.

Children. In order to avoid early closure of the growth zone of the pineal gland or premature sexual development, hCG is used with caution in boys in the prepubertal period. It is necessary to carefully monitor the development of the musculoskeletal system.

The interactions of the drug rotted with other drugs have not been studied; therefore, interactions with commonly used drugs cannot be ruled out.

After administration, Pregnil may have an effect on the immunological determination of hCG in plasma / urine for up to 10 days, so a pregnancy test may be false positive.

The acute toxicity of urinary gonadotropin preparations has been shown to be very low. however, it is likely that a too high dose of hhg may cause the development of ovarian hyperstimulation syndrome.