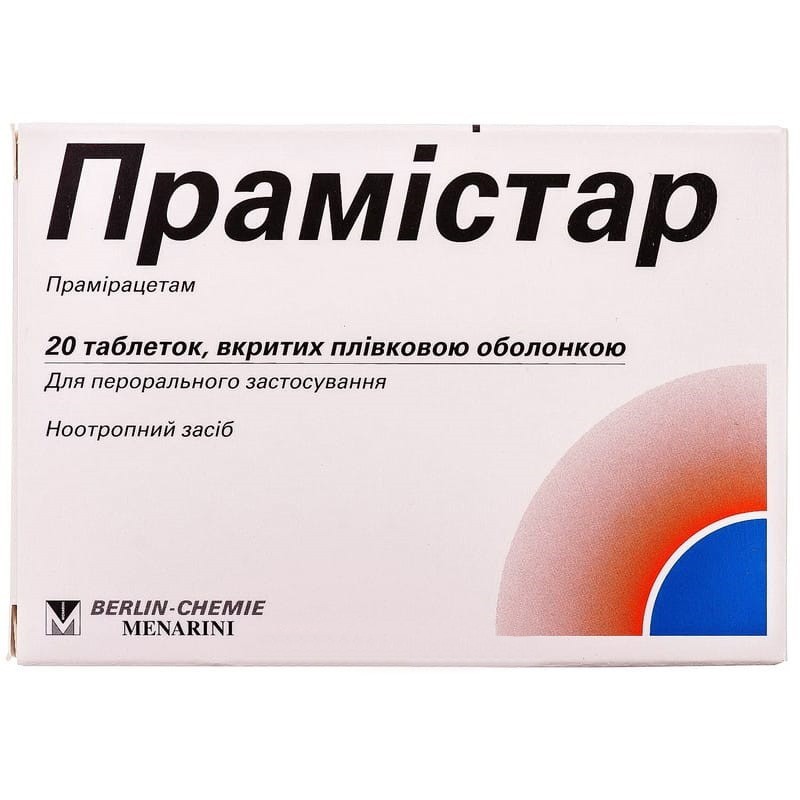 Pramiracetam is a nootropic drug that improves memory and learning ability. the mechanism of action of the drug is not fully defined. by acting on cholinergic receptors and choline metabolism, pramiracetam stimulates neuronal activity. Pramiracetam has no inhibitory effect on the central nervous system and has no effect on the autonomic nervous system. Pramiracetam also has an antidepressant effect. during clinical trials in patients with mild to moderate senile dementia, pramiracetam increased concentration, improved ability to learn, remember, orient, and other mental activity.

Pharmacokinetics Studies of pharmacokinetics in humans have shown that the drug is rapidly and almost completely absorbed in the digestive tract. Cmax in blood plasma is reached after 2-3 hours. T½ is 4-6 hours. Pharmacokinetic parameters in elderly and young patients are similar. However, together with a decrease in creatinine clearance, the clearance of pramiracetam decreases. Pramiracetam does not bind to plasma proteins and is excreted in the urine in an almost unchanged state.

Decreased ability to concentrate and impaired memory of a degenerative or vascular origin, especially in the elderly.

The recommended dose is 600 mg every 12 hours. The total daily dose should not exceed 1200 mg. a clinically significant effect can be expected no earlier than 4–8 weeks of treatment.

Patients of advanced age. No dose adjustment is required.

Hypersensitivity to the active substance or other components of the drug, cerebral hemorrhage, severe renal failure, liver failure.

From the digestive system: dry mouth, incontinence, dyspepsia, nausea, pain in the upper region of the stomach;

from the side of metabolism and nutrition: decreased appetite;

from the musculoskeletal system and connective tissue: painful muscle spasms;

from the nervous system: dizziness, tremor;

from the kidneys and urinary system: urinary incontinence.

Children. The study in children was not carried out, therefore, the drug is not recommended for children.

Interactions with cardiac glycosides, xanthines, anticoagulants and APF inhibitors were not detected in patients taking 600 mg of pramiracetam every 12 hours.

When prescribing to patients the active substances of the same pharmacological group with pramiracetam (e.g. piracetam) simultaneously with thyroid extract (T3 + T4) noted confusion, irritability and sleep disorders. According to the published simple blind study in patients with severe recurrent venous thrombosis, the use of piracetam (9.6 g / day) did not lead to a change in the dose of acenocoumarol to achieve the required international normalized ratio of 2.5-3.5. But compared with the action of acenocoumarol alone, the addition of piracetam (9.6 g / day) significantly reduced platelet aggregation, beta-thromboglobulin release, fibrinogen levels and von Willebrand factors (VIII: C, VIII: vW: Ag, VIII: vW: Rco), as well as the viscosity of blood and blood plasma.

There are no reports of overdose. with a significant excess of the recommended therapeutic doses, symptomatic therapy should be carried out.

At a temperature not exceeding 30 ° C.

Shelf life is 3 years. Do not use after the expiration date printed on the package.