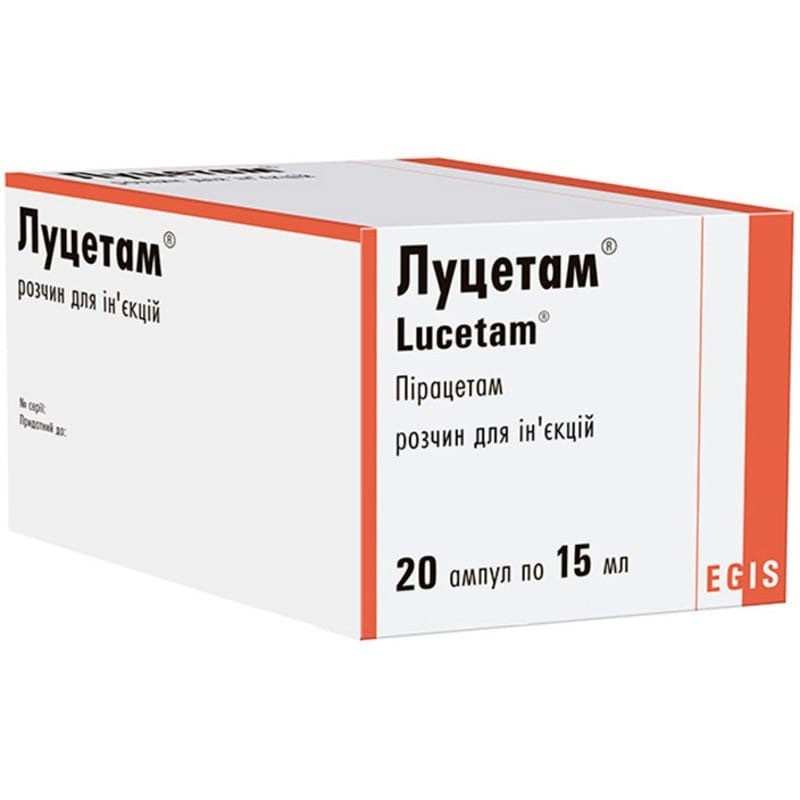 the active ingredient in lucetam is piracetam, a cyclic derivative of gamma. piracetam is a nootropic agent acting on the brain, improving cognitive functions such as learning ability, memory, attention, and mental performance in healthy individuals and patients with cognitive impairment. these effects are not associated with a sedative or stimulating effect. the effects of piracetam are due to stimulation of nucleotide metabolism in neurons, an increase in glucose and oxygen utilization in the brain, as well as an increase in cholinergic and dopaminergic mechanisms of transmission of excitation in the nervous tissue. piracetam has the property of dose-dependent binding to a phospholipid double layer of cell membranes, and it restores their structure, thus increasing fluidity and improving the function of membranes.

There are probably several mechanisms of the drug’s effect on the central nervous system: a change in the rate of excitation propagation in the brain, an increase in metabolic processes in nerve cells, an improvement in microcirculation by affecting the rheological properties of blood, without having a vasodilating effect. Improves connections between the cerebral hemispheres and synaptic conduction in neocortical structures. Piracetam inhibits platelet aggregation and restores the elasticity of the erythrocyte membrane, reduces the adhesion of red blood cells. At a dose of 9.6 g, it reduces the level of fibrinogen and von Willebrand factors by 30–40% and lengthens the bleeding time. Piracetam has a protective or restoring cognitive function effect in case of impaired brain function (hypoxia, poisoning, electroconvulsive therapy) or after these conditions. Piracetam reduces the severity and duration of vestibular nystagmus.

Animal experiments have shown that piracetam protects the central nervous system from hypoxia, brain injury, toxic and electroconvulsive effects, and also reduces the negative impact of these factors.

Pharmacokinetics After using the drug inside, piracetam is rapidly and almost completely absorbed. Cmax in blood plasma, approximately 30 minutes after ingestion or parenteral administration of 2 g of piracetam is achieved; Cmax in CSF - after 5 hours (2–8 hours with parenteral administration) and amounts to 40–60 μg / ml. The bioavailability of the drug is almost 100%. The volume of distribution of piracetam is almost 0.6 l / kg body weight. Simultaneous food intake does not affect the degree of absorption of the drug, but the value of C decreasesmax and Tmax rises. T½ the drug from blood plasma is 4–5 hours, from the CSF - 8.5 hours. This period can be extended with renal failure. It does not bind to plasma proteins, is not metabolized in the body. 80-100% of piracetam is excreted by the kidneys unchanged by glomerular filtration. The renal clearance of piracetam in healthy volunteers is 86 ml / min. The pharmacokinetics of piracetam does not change in patients with liver failure. Piracetam crosses the BBB and the placental barrier (the concentration in the fetal blood reaches 70–90% of the concentration in the mother’s blood) and passes into breast milk. Piracetam undergoes dialysis (removal efficiency - 50-60%). In animal studies, it was found that piracetam selectively accumulates in the tissues of the cerebral cortex, mainly in the frontal, parietal and occipital zones, cerebellum, basal ganglia, caudate nucleus, hippocampus, lateral crankshaft and vascular plexus of the brain.

Tablets are used orally with a little water. the drug in the form of an injection solution is used in acute cases or when it is impossible to use oral forms of piracetam. the drug is used either intravenously (administered slowly, over several minutes), or as an infusion (continuously for 24 hours).

Adults Treatment of conditions associated with memory impairment, cognitive impairment. The initial daily dose is 4.8 g during the 1st week of treatment. Typically, the dose is divided into 2-3 doses (administration). The maintenance dose is 2.4 g / day, divided into 2-3 doses (administration). In the future, a gradual dose reduction of 1.2 g / day is possible.

Treatment of cortical myoclonia. The initial daily dose is 24 g for 3 days. If the desired therapeutic effect is not achieved during this time, continue to use the drug in the same dose (24 g / day) for up to 7 days. If on the 7th day of treatment the therapeutic effect is not achieved, treatment is stopped. If the therapeutic effect has been achieved, then, starting from the day when a steady improvement is achieved, reduce the dose of the drug by 1.2 g every 2 days until the manifestations of cortical myoclonia appear again. This will make it possible to establish the average effective dose.

The daily dose is divided into 2-3 doses (administration). Treatment with other anti-myoclonic agents is maintained at pre-determined doses. Therapy is continued until the symptoms of the disease disappear. To prevent the deterioration of the condition of patients can not abruptly stop using the drug. It is necessary to gradually reduce the dose by 1.2 g every 2-3 days. It is required every 6 months to prescribe repeated courses of treatment, while adjusting the dose depending on the patients condition, until the disappearance or decrease in the severity of the disease.

Dosing in patients with impaired renal function. Since the drug is excreted from the body by the kidneys, caution should be exercised in the treatment of patients with renal failure.

Assign treatment to these patients, depending on the severity of renal failure, observing the following recommendations.

Hypersensitivity to piracetam and other pyrrolidone derivatives, as well as to other components of the drug; acute cerebrovascular accident (hemorrhagic stroke); end-stage renal failure; Huntington Chorea.

Adverse reactions noted during post-marketing observations are listed below for organ systems.

On the part of the blood and lymph: isolated cases - hemorrhagic disorders.

From the side of the immune system: isolated cases - hypersensitivity, anaphylactoid reactions.