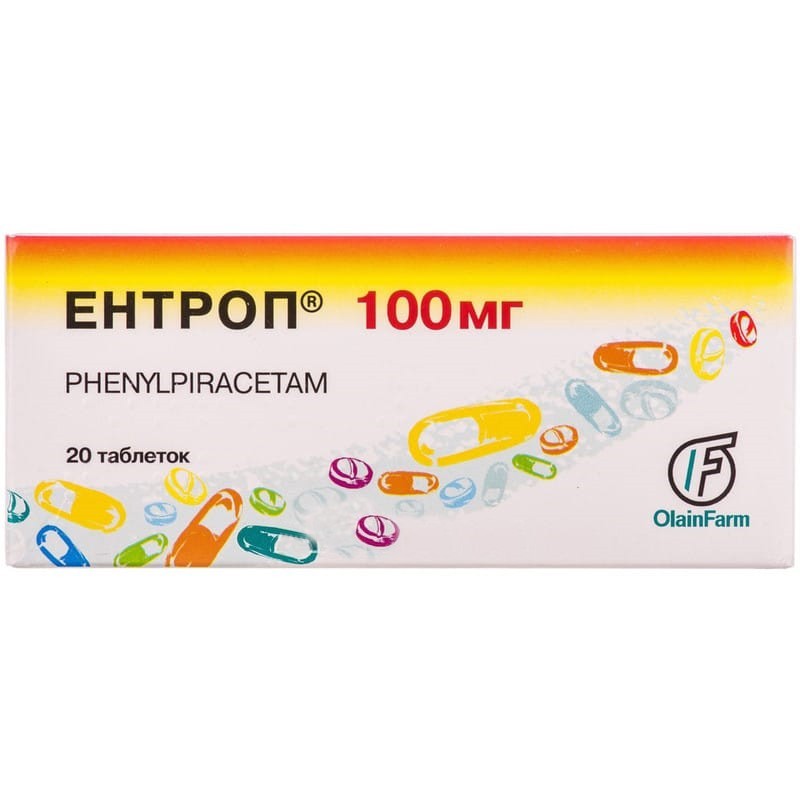 entrop has a direct activating effect on the integrative activity of the brain, promotes memory consolidation, improves concentration and mental activity, facilitates the learning process, increases the resistance of brain tissue to hypoxia and toxic effects, shows anticonvulsant and anxiolytic activity, regulates the processes of activation and inhibition of central nervous system, improves mood.

The drug has a positive effect on metabolic processes and blood circulation of the brain, stimulates redox processes, increases the energy potential of the body through the utilization of glucose, improves regional blood flow in ischemic areas of the brain. Increases the content of norepinephrine, dopamine and serotonin in the brain, does not affect the level of GABA, does not bind to GABAAND-, not with GABAAT-receptors, does not significantly affect the spontaneous bioelectric activity of the brain.

Entrop has no effect on respiration and the cardiovascular system, exhibits a mild diuretic effect, and has anorexigenic activity in case of course use.

The stimulating effect of the drug Entrop is manifested in its ability to have a moderately pronounced effect on motor reactions, in increasing physical disability, in the pronounced antagonism of the cataleptic effect of antipsychotics, and also in reducing the severity of the hypnotic effect of ethanol and hexenal.

The adaptogenic effect of phenylpiracetam is manifested in increasing the bodys resistance to stress under conditions of excessive mental and physical stress, with increased fatigue, hypokinesia and immobilization, at low temperatures.

When taking the drug Entrop marked improvement in vision, which is manifested in the improvement of visual acuity and the expansion of the field of view.

With the course use of the drug Entrop, drug dependence, tolerance, withdrawal syndrome do not develop.

The effect of the drug appears after a single dose, which is important when using the drug in extreme conditions.

The drug does not have teratogenic, mutagenic, carcinogenic and embryotoxic properties. Toxicity - low lethal dose in an acute experiment is 800 mg / kg body weight.

Pharmacokinetics The drug is rapidly absorbed, penetrates into various organs and tissues, easily penetrates the BBB. The absolute bioavailability of the drug when administered orally is 100%. WITHmax achieved after 1 h, T½ - 3-5 hours. The drug is not metabolized in the body and is excreted from it unchanged. About 40% of the drug is excreted in the urine, 60% - with bile and sweat.

Diseases of the central nervous system of various genesis, accompanied by a deterioration in intellectual-mnestic functions, a decrease in motor activity. neurotic conditions, manifested by lethargy, fatigue, decreased psychomotor activity, impaired attention, memory, information assimilation. mild to moderate depression. psycho-organic syndromes, manifested by intellectual-mnestic disorders and apathetic-abulic phenomena, sluggish apathetic states in schizophrenia. convulsive conditions.prevention of hypoxia, increased resistance to stress, correction of the functional state of the body in extreme conditions of professional activity in order to prevent the development of fatigue and increase mental and physical performance, correction of daily biorhythm, inversion of the sleep-wake cycle. chronic alcoholism (in order to reduce the phenomena of asthenia, depression, intellectual and mnestic disorders).

The recommended duration of treatment for patients with alimentary-constitutional obesity is 30-60 days at a dose of 100-200 mg 1 time per day (in the morning).

It is not recommended to take Entrop after 15:00.

Hypersensitivity to the components of the drug.

From the digestive tract: rarely - dry mouth, dysgeusia (bitter taste in the mouth).

With excessive psycho-emotional exhaustion against the background of chronic stress and overwork, chronic insomnia, a single entropic intake at first may cause a sharp need for sleep. such patients on an outpatient basis should be advised to start a course of taking the drug on non-working days.

Entrop is used with caution for the treatment of patients with severe liver and kidney damage, severe hypertension, atherosclerosis, as well as patients who have previously had panic attacks, acute psychotic conditions, accompanied by psychomotor agitation, due to the possibility of exacerbation of symptoms of anxiety, panic, hallucinations and delirium, as well as in patients predisposed to allergic reactions to nootropic drugs of the pyrrolidone group.

The drug contains lactose, therefore, patients with the rare hereditary forms of galactose intolerance, lactase deficiency or glucose-galactose malabsorption syndrome should not use the drug.

Children. The drug is not used in children.

Entrop can enhance the action of drugs that stimulate central nervous system, antidepressants and nootropic drugs; enhances and prolongs the effect of sleeping pills, drugs and antiparkinsonian drugs.

In case of an overdose, an increase in adverse reactions is possible.