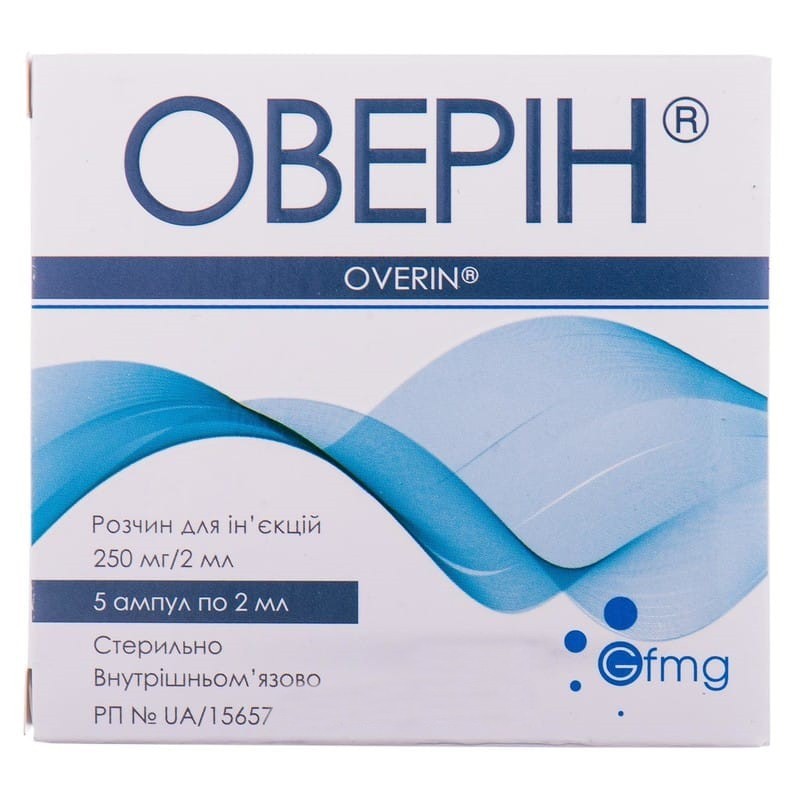 Overin (inn - kridanimod) - an immunostimulating agent containing sodium oxyhydroacridinyl acetate as an active ingredient, is used primarily for the treatment and prevention of various viral infections. Cridanimod is a low molecular weight interferon inducer (kovalenko a.l. et al., 2000). antiviral and immunomodulatory therapy is urgently needed to prevent those viral infections that cannot be controlled by vaccination (de clercq e. 2013). There is evidence of the clinical benefits of including immunomodulators in the treatment of infectious mononucleosis (gordeets a.v. et al., 2011). the antiviral effectiveness of overin is primarily due to its ability to induce the production of interferon, as well as have a detrimental effect on RNA and dna-containing viruses. Overin is promising in this regard with respect to the prevention of ARVI, cytomegalovirus infection, infections caused by the herpes simplex virus, etc. It also has an anti-inflammatory effect and antiproliferative effect, since kridanimod is able to activate natural killers in cancer diseases (kovalenko al et al., 2000) . overein activates immunocompetent cells, normalizes the balance between their subpopulations.

The role of interferon in the immune system

Interferon is the most important mediator of natural immunity, which involves the use of interferon inducers as therapeutic and prophylactic drugs.

Interferons are a family of glycopeptides that are divided into type I and type II. Type I interferons are the so-called alpha and beta interferons, they are produced by lymphocytes, normal killers, and endothelium. Cytokines of the type I interferon family play a major role in the detection of antiviral, but also antibacterial effector functions. Type II interferon is a gamma interferon that is secreted by activated T-helpers and normal killers. It is he who is credited with the antiproliferative effect and the ability to regulate the bodys immune response.

Interferons have a wide range of immune effects, affecting essentially all the main parts of the immune response. This is primarily the antiviral and antibacterial effect. Also, interferon effects include immunomodulatory and antiproliferative (Stewart W.E., 1979). It has also been proven that, under the influence of interferons in the cells, the genes involved in the response to the introduction of the virus are activated (de Veer M.J. et al., 2001). The products of these genes have many antiviral effects that intersect and reinforce each other; at present they are not yet fully understood and are subject to further detailed study (Schoggins J.W., Rice C.M., 2011).

The antiviral effect is realized through the destruction of the RNA of the virus. Inhibition of the synthesis of messenger RNA also plays a large role, which leads to a disruption in the synthesis of viral envelope proteins. The antitumor effect is realized primarily due to the activation of cytotoxic cells and modulation of antibody production. Under the influence of interferons, the formation of tumor cell proteins, RNA, and growth factors is inhibited, and neoplasm cell division is slowed down. It has been shown that interferons inhibit the process of vascular formation in the tumor. Other mechanisms are also relevant, up to the modulation of sensitivity to cytostatic therapy.

The immunomodulatory effect of interferons is associated with increased expression of HLA antigens, activation of effector cytotoxic cells, and regulation of cell sensitivity to cytokines.

The antibacterial effect of interferons is explained by their ability to change the composition of enzymes and cause metabolic disturbance in the bacterial cell and thus lead to its destruction (Drannik G.N., 2003). Interferons have a very high biological activity. The presence of a wide range of immune effects of interferon prompted scientists to search for opportunities to induce its formation for targeted use in the treatment of infectious diseases, immunosuppression states and in oncology.

Search for drugs that can induce the production of endogenous interferon

In the early 1970s, several groups tried to develop low molecular weight compounds with oral bioavailability that could initiate type I interferon responses, thereby blocking virus replication. In the course of these studies, the first of the described low molecular weight compounds was the tricyclic compound Tilorone (2,7-bis (2-diethylamino) ethoxy) fluoren-9-one), which showed a wide spectrum of antiviral activity against many viruses (Krueger RE, Mayer GD, 1970 ) However, although most of these low molecular weight compounds have shown excellent induction of type I interferon and antiviral activity in rodents (Kramer MJ et al., 1976; Taylor JL et al., 1980a, JL et al., 1980b), these promising results have not been confirmed in studies both in vitro on human cells and in vivo in humans. Tilorone, for example, did not reveal the induction of type I interferon in the human body both with systemic and local administration (Kaufman H.E. et al., 1971). Subsequently, heterogeneous heterocyclic compounds were reported to induce type I interferons, including various derivatives of quinoline, anthraquinone and acridine. So, after a long research search, the molecule that even surpassed most of these compounds in antiviral activity became cridanimod (sodium oxodihydroacridinyl acetate, the chemical name taken at that time in the western countries where the studies were conducted, 10-carboxymethyl-9-acridanone), detected by E Grunberg and colleagues in 1976 (Kramer MJ et al., 1976).

Subsequently, in studies in rodents (mice and hamsters were taken as models), it was shown that the kridanimod has powerful antiviral activity, and this can mainly be explained by its ability to induce the production of type I interferon (Taylor JL et al., 1980; Kramer MJ et al., 1981; Storch E., Kirchner H., 1982). Cridanimod has also demonstrated its ability to induce in vitro production of interferon in mouse macrophage cell cultures (Brehm G. et al., 1986) and in mouse T cell lines (Storch E. et al., 1986).

In the same years, studies of crydanimod were practically discontinued. Nevertheless, at present, kridanimod is widely used and used in post-Soviet countries as immunomodulating and antiviral therapy, including hepatitis B virus, hepatitis C, HIV, and herpes simplex virus (Silin et al., 2009).

An in vitro study on macrophage cultures obtained from mouse bone marrow demonstrated the induction of interferon by a crydanimod. This drug induced high titers of interferon in mouse white blood cell cultures. Cells of thymocytes, lymph nodes, spleen, and peritoneal exudate reacted to the treatment with a crydanimode with the production of interferon. Pure macrophages derived from bone marrow were the most effective producers of the cryptanimod-induced interferon.It was found that kridanimod is the first low molecular weight compound that induces in vitro interferon titers, almost as high as those obtained after exposure to the Newcastle disease virus, which is one of the most powerful interferon inducers (Storch E., Kirchner H., 1982).

In an in vivo study in rodents (mice and hamsters were taken as experimental animals), the efficacy of cridanimod in infection with Japanese encephalitis virus was studied. Based on the described ability of kridanimod to increase interferon titers in vitro, the task was to study the therapeutic effect of this substance in rodents infected with a severe viral infection. According to the data, the low molecular weight chemical inducer of interferon, kridanimod, effectively prevented the death caused by the Japanese encephalitis virus, introduced peripherally to weaner mice and young hamsters. A marked decrease in fatal outcome was observed in mice even with a single administration of this drug intraperitoneally, subcutaneously or intramuscularly to an animal infected intraperitoneally with Japanese encephalitis virus. The degree of protection depended on the dose and time of administration of cridanimod depending on the infection with the virus: all hamsters that received this drug on the same day as the Japanese encephalitis virus survived, the probability of survival decreased (although it remained significantly higher than in the control group, not receiving kridanimod) with a delay in the introduction of the drug. Virusemia, an important characteristic of the pathogenesis of natural Japanese encephalitis virus infection, has been reduced by almost 10,000 times in hamsters receiving crydanimod. Thus, in experimental animal models developed for these studies, the crydanimod had a pronounced therapeutic and prophylactic effect against Japanese encephalitis virus (Taylor J.L. et al., 1980). In the experiment, data were obtained that kridanimod is an inhibitor of phosphodiesterase (Römer W., Schulze W., 1983).

The in vitro study also revealed the membrane-active effect of cridanimod. The stabilizing effect of this drug on human erythrocyte membranes when exposed to a hypotonic solution was demonstrated (Piasecki E. et al., 1985).

Overin - low molecular weight interferon inducer with antiviral activity against a wide range of viruses. This drug has the ability to activate bone marrow stem cells, enhance the activity of immunocompetent cells (including macrophages and normal killers, as well as polymorphonuclear leukocytes). Overin can be used in complex therapy of diseases caused by DNA and RNA viruses. The effectiveness of its prophylactic use in infectious diseases is shown. Ability Overina to reduce the production of tumor necrosis factor has found its clinical application in the treatment of sepsis and HIV infection. Application Overina effective in cases of depression of immunity (including under the influence of radiation exposure). Recommended inclusion Overina in treatment regimens for multiple sclerosis.Due to its antitumor effect, this drug can be included in complex treatment regimens for cancer.