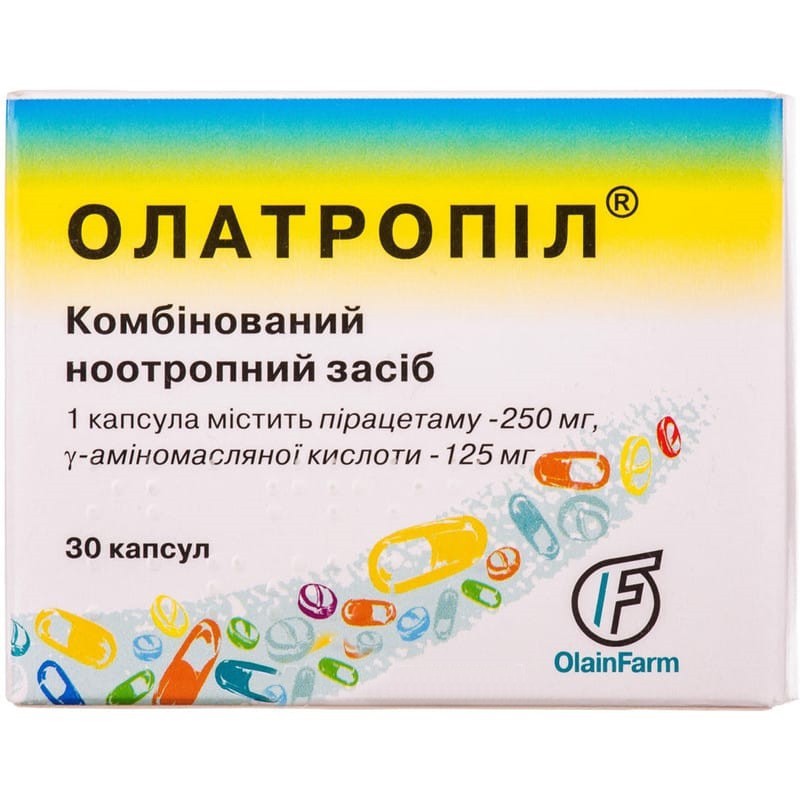 Olatropil is a combined preparation whose properties are determined by the properties of its components: gamk (aminalon) and pyrrolidone derivative - piracetam. Gamk is the main mediator of braking processes in the central nervous system. the neurometabolic effect of the drug is due mainly to a stimulating effect on the gamma-ergic system, which ensures the normalization of the dynamics of nervous processes. Gamk increases the activity of energy processes in the central nervous system, improves glucose uptake, activates the blood supply to brain tissue. aminalon improves the dynamics of nervous processes in the brain, thinking processes, memory, increases concentration, helps to restore motor activity and speech after cerebrovascular accident, has a mild psychostimulating effect.

The second component of Olatropil is piracetam - a cyclic derivative of GABA - a nootropic drug that acts on the brain, improving cognitive (cognitive) functions, such as learning ability, memory, attention, and mental ability to work. There are probably several mechanisms of the influence of piracetam on the central nervous system: a change in the rate of propagation of excitation in the brain; increased metabolic processes in nerve cells; improvement of microcirculation by affecting the rheological characteristics of the blood without causing a vasodilating effect. Improves connections between the cerebral hemispheres and synaptic conduction in neocortical structures. After prolonged use of the drug, an improvement in cognitive functions, attention is noted. These changes are objectively recorded on the electroencephalogram (amplification of α- and β-rhythms of the brain and weakening of δ-rhythms). Piracetam inhibits platelet aggregation and restores the elasticity of the erythrocyte membrane, reduces the adhesion of red blood cells.

Piracetam has a protective and restorative effect in case of impaired brain function due to hypoxia, intoxication, electroconvulsive therapy.

With the combined action of both components, nootropic and antihypoxic processes intensify, physical ability to work increases, and tolerance to stressful effects of various genesis improves. The pronounced synergism of the action of aminalon with piracetam reduces the therapeutic doses of each of the components of the combination, thereby reducing the severity of possible side effects and increasing the safety of treatment.

Aminalon and piracetam, which are part of Olatropil, after oral administration are well absorbed, penetrating into organs and tissues, including the brain. Excreted by the kidneys in part in the form of metabolites, and piracetam - mainly in unchanged unmetabolized form.

Olatropil is taken orally before meals. the optimal dose for adults is the appointment of 1 capsule 3-4 times a day. if necessary, a gradual increase in dose to 6 capsules per day is possible.

The therapeutic effect, as a rule, develops after 2 weeks from the start of treatment.

The doctor determines the duration of the course of treatment with the drug individually, usually it is from 1 to 2 months and, if necessary, is repeated after 6-8 weeks.

Hypersensitivity to piracetam or pyrrolidone derivatives, as well as other components of the drug.

From the side of the nervous system: often - hyperkinesia; sometimes - ataxia, headache, insomnia, imbalance, drowsiness, increased frequency of epilepsy attacks.

From the immune system: sometimes - hypersensitivity reactions, including anaphylactoid reactions.

On the part of the skin and subcutaneous tissues: sometimes - angioedema, dermatitis, itching, rash, urticaria.

On the part of the organ of hearing and the labyrinth: sometimes - dizziness.

If any adverse reactions occur, discontinue use of the drug and be sure to consult a doctor.

At the beginning of treatment, control of hell is necessary because of the possibility of its fluctuation.

Elderly patients with exacerbation of heart failure should reduce the dose of the drug or stop taking the drug.

The appointment of Olatropil is not recommended for patients with psychomotor agitation.

With long-term therapy, elderly patients are recommended regular monitoring of renal function, if necessary, adjust the dose depending on the results of a study of creatinine clearance.

Due to the fact that piracetam reduces platelet aggregation, it is necessary to prescribe the drug with caution to patients with hemostatic disorders, conditions that may be accompanied by hemorrhages (gastrointestinal ulcer), before and after extensive surgical interventions (including dental interventions), patients who use anticoagulants, platelet antiplatelet agents, including acetylsalicylic acid in low doses, or to patients with symptoms of severe bleeding.

The drug penetrates the filter membranes of hemodialysis machines.

It is not recommended to use the drug in the evening and before bedtime due to a possible sleep disturbance.

It is not recommended to drink alcohol during treatment.

Children. The drug is not prescribed for children.

Olatropil enhances the effect of antidepressants, which is especially important in the case of resistance to therapy with typical or atypical antidepressants.

Olatropil reduces the severity of side effects of antipsychotics, tranquilizers and sleeping pills.

When combined with thyroid hormones (T3 + T4) increased irritability, disorientation and sleep disturbances are possible. There was no interaction of piracetam with clonazepam, phenytoin, phenobarbital, sodium valproate.When using piracetam at a dose of 20 mg / day, C does not changemax and AUC of these drugs in patients with epilepsy. In patients with severe recurrent thrombosis, the use of piracetam in high doses (9.6 g / day) did not affect the dosage of acenocoumarol to achieve a prothrombin time of 2.5–3.5, but with simultaneous use, a significant decrease in platelet aggregation level, level fibrinogen, von Willebrand factors, blood and plasma viscosity. The probability of changing the pharmacodynamics of piracetam under the influence of other drugs is low, since 90% of the drug is excreted unchanged in the urine. The metabolic interaction of piracetam with drugs that are metabolized by the cytochrome P450 isoforms listed below is unlikely, since in vitro experiments it was found that at a dose of 142; 426; 1422 μg / ml piracetam does not change the activity of cytochrome P450 isoforms such as CYP 1A2, 2B6, 2C8, 2C9, 2C19, 2D6, 2E1 and 4A9 / 11, and at a dose of 1422 μg / ml it slightly inhibits the activity of CYP 2A6 and 3A4 / isoforms 5 (by 21 and 11%, respectively), but the level of Ki of these two CYP isomers remains sufficient.

With the simultaneous use of benzodiazepine drugs (tranquilizers, anticonvulsants), as well as sedatives (barbiturates), a mutual enhancement of the effect is observed. When combined with benzodiazepine-type drugs, each of the drugs should be prescribed in minimum or medium effective doses.

Pyridoxine Hydrochloride (Vitamin B6) may enhance the effect of the drug.

The components of olatropil belong to the class of non-toxic substances, therefore, there have been no cases of poisoning. with the appearance of psychomotor agitation in case of an overdose of the drug, the introduction of sedatives is recommended.

If the dose is exceeded, an increase in the severity of side effects of the drug is possible.

The treatment is symptomatic. There is no specific antidote; hemodialysis can be used (elimination of 50-60% piracetam).

In the original packaging at a temperature not exceeding 25 ° c. terms of leave from pharmacies: without a prescription.