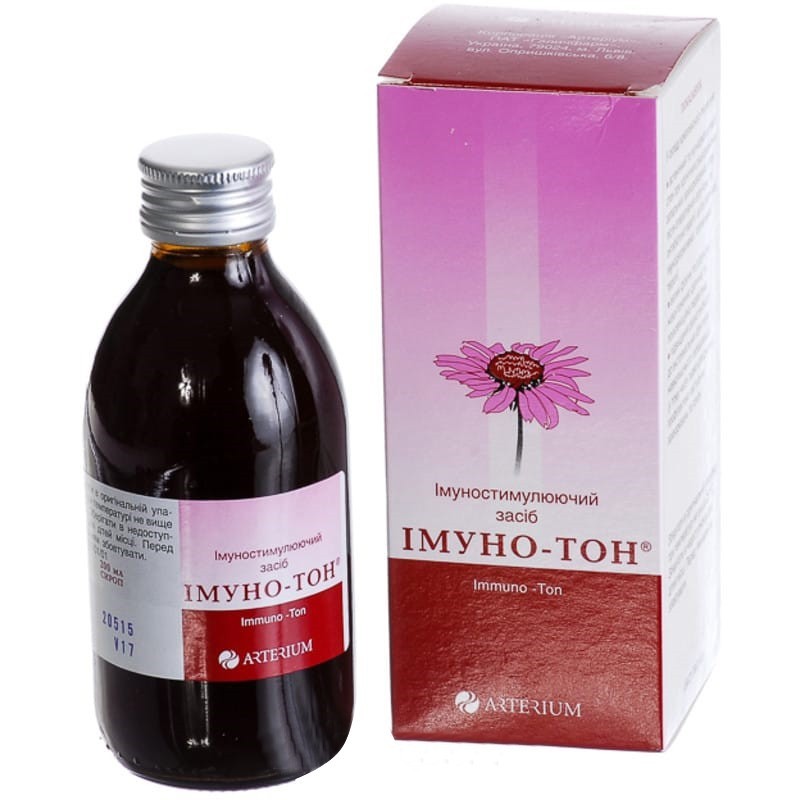 immuno-tone has a combined adaptogenic and immunomodulating effect, due to the properties of biologically active substances Echinacea, Eleutherococcus and St. Johns wort. immuno-tone stimulates the bodys natural protective mechanisms under extreme conditions when exposed to adverse environmental factors (including hypothermia), as well as after severe illnesses, it stimulates the immune system and has a mild tonic effect on the central nervous system. immuno-tone has a pronounced radioprotective, stress-protective, antidepressant, anti-inflammatory, actoprotective (antioxidant and antihypoxic) effect.

Usually, the immune tone is well tolerated. Echinacea purpurea, which is part of the drug, can cause hypersensitivity reactions in the form of shortness of breath, dizziness or decreased hell. when using the drug are possible:

from the gastrointestinal tract: dyspeptic phenomena;

on the part of the cardiovascular system: increased blood pressure, heart rhythm disturbance;

With prolonged use, phenomena of a decrease in the function of the immune system may develop.

During the use of the drug, the immuno-tone, patients should avoid prolonged exposure to sunlight, refuse to visit the solarium due to the risk of skin reactions associated with photosensitivity.

If surgical operations are necessary, the use of the drug must be canceled at least 5 days before the operation.

The drug contains sugar syrup, so patients with diabetes mellitus should consult a doctor before using the drug.

Children. The drug is contraindicated in children under the age of 12 years.

The ability to influence the reaction rate when driving vehicles or working with other mechanisms. You should refrain from driving vehicles and activities that require increased attention and speed of psychomotor reactions.

Nausea, vomiting, insomnia, hyperglycemia, allergic skin reactions. with a significant severity of these phenomena, you should rinse the stomach, prescribe antihistamines.

In the original packaging at temperatures up to 25 ° C.

A comprehensive medical approach involves not only the elimination of the pathological process - the principle of "treat not the disease, but the patient" has been known since ancient times. that is why the key to effective therapy is the selection of not only etiotropic and symptomatic drugs, but also the adequate use of restorative agents. This is especially true in pediatrics (treatment of often and long-term ill children) and in family medicine (the period of convalescence after serious illness or injury). in this case, plant adaptogens come to the rescue. one of these drugs is the immuno-tone.

How does the immune tone

The drug is a combination of 3 alcoholic extracts - Eleutherococcus, Echinacea and St. Johns wort - in sugar syrup. The immuno-tone is available in the form of syrup, it can be taken in pure form or dissolved in water, tea, milk (instruction of the Ministry of Health of Ukraine).

Prickly Eleutherococcus (Eleutherococcus senticosus) is an adaptogen widely used in medicine, also known as Siberian ginseng. In the pharmaceutical industry, an extract of its rhizome with roots is used, which is rich in eleutherosides (plant glycosides of prickly eleutherococcus), flavonoids, coumarin derivatives and essential oils. Of greatest importance are eleutheroside B (syringin) and eleutheroside E (syringarezinol), as well as acanthosides, phytosterols, triterpene saponins, monopyranose, isomers of 5′-O-caffeoylquinic acid (chlorogenic) acid and lignans (LactMed, 2018. Eleutherosides provide a stimulating effect of the drug in the field of mental and physical activity, resistance to aggressive external factors, and increase stress resistance.

The prickly Eleutherococcus extract contains such an active substance as florizin. In the experiment, it was proved (Choi H.R., 2016) that florizin has a stimulating effect on keratinocytes - the cells that make up the bulk of the epidermis.As a result of its action, the epidermis thickens, and the content of such non-cellular components as integrin α increases in it6integrin β1 and type IV collagen. The beneficial effects of prickly eleutherococcus extract on the skin are also associated with its antiacetylcholinesterase and antihyaluronidase properties (Adamczyk K., 2019).

In an experiment on rats, it was proved (Lee D., 2019) that taking eleutherococcus extract stimulates bone regeneration - it accelerates the endochondral formation of bone tissue and promotes hypertrophy of the germ zone.

Prickly Eleutherococcus extract has also proven itself in sports medicine - it accelerates regeneration after physical exertion by enhancing the processes of β-oxidation of fatty acids in skeletal muscle (Sumiyoshi M., 2016).

Echinacea purpurea (Echinacea purpurea) has long been known for its immunostimulating, antiviral and anti-inflammatory effects. This plant belongs to perennial herbaceous herbs. The activity of the drug is provided by echinacin, echinolone and echinacoside - specific bioflavonoids. In addition, organic acids (ferulic, coumaric, coffee), saponins, polyamines, phytosterols are among the active organic components of Echinacea purpurea. All of them provide antioxidant, anti-inflammatory, hypoglycemic and antiproliferative activity of the plant extract (Aarland R.C., 2017).

Echinacea purpurea extract has proven itself in traditional medicine as a non-specific tool for the prevention and treatment of acute respiratory diseases - the use of echinacea preparations in the autumn-winter period reduces the number of colds (Ross SM, 2016) and the duration of the disease (Shah SA, 2007) .

Studies have shown (Park S., 2018) that echinacea purpurea extract can inhibit the development of stress immunosuppression. The drug mainly affects cellular immunity: it promotes the proliferation and maturation of immunocompetent cells in the spleen, modulation of the activity of NK cells, subpopulations of T-lymphocytes, as well as the level of cytokines in the blood. The immunomodulating effect is enhanced by stimulating the phagocytic activity of macrophages, as well as inhibiting the pro-inflammatory response of epithelial cells to contact with viruses and bacteria (Hudson J.B., 2012).

The pronounced anti-inflammatory properties of Echinacea purpurea are used in dermatology - its active substances have proven themselves in the complex treatment of atopic dermatitis (Oláh A., 2017).

Hypericum perforatum (Hypericum perforatum) is a perennial herb spreading throughout the northern hemisphere, which is widely used not only in folk, but also in traditional medicine. Hypericum perforatum is one of the herbs that have long been widely used in medical practice (Russo E., 2014). The spectrum of its therapeutic effects has been well studied and described. Of the greatest interest are the following active ingredients - hyperforin and hypericin, as well as naphthodianthrons, xanthones (Russo E., 2014) and flavonoids such as rutin, quercetrin, isocvercitrin, quercetin, rutin, amentoflavon (Marrelli M., 2016).

Hypericum perforatum extract has anti-inflammatory and antioxidant effects that can be used in pain management. Scientists (Stojanović N.M., 2016) note that St. Johns wort extract is one of the strongest painkillers obtained from the plant. In particular, the effect of St. Johns wort extract perforated in the treatment of such a variety of neuropathic pain as trigeminal neuralgia has been proven (Assiri K., 2017).The mechanisms of the anti-inflammatory effect of St. Johns wort are not fully understood, however, the pronounced antiproliferative and anti-migration effects of this substance have been revealed (Borawska M.H., 2016).

In addition, in the experiment on rabbits, the positive wound healing effect of St. Johns wort extract perforated with bone damage was proved - it helps to increase the density, width and separation of bone trabeculae in the newly formed tissue (Damlar I., 2017).

In a rat study, it was also proved that St. Johns wort perforated exerts a histoprotective effect in conditions of tissue ischemia with subsequent reperfusion. Its use significantly reduces the level of malondialdehyde in tissues and at the same time increases the activity of catalase, glutathione peroxidase and superoxide dismutase (Cakir M., 2017), which contributes to the utilization of free radicals in tissues that have been deprived of normal oxygenation for a long period.

The antioxidant effect of hypericum perforatum extract is realized through the inhibition of caspase-3 in astrocytes (Cinci L., 2014) and provides the property of the drug to inhibit neuropathy, including those associated with chemotherapy.

In addition, in animal experiments (Farsak M., 2017), the wound healing effect of St. Johns wort perforated was noted. Moreover, this effect is observed even in conditions of diabetic angiopathy.

In what cases is the use of Immuno-tone indicated

Immuno tone It is used for therapeutic and prophylactic purposes in such situations:

• the drug can be used for nonspecific stimulation of immunity in the autumn-winter period, when outbreaks or epidemics of influenza and other acute respiratory viral infections are observed. This is especially important for often and long-term sick teenagers and adults, in whom every common cold is complicated by tonsillitis, sinusitis, or bronchopulmonary pathology;

• to increase resistance to extreme external influences (for example, hypothermia);

• in the event that a person has a period of psychoemotional or physical overwork, prolonged stressful situation;

• the drug is well suited for the correction of asthenic conditions that develop after infectious and inflammatory diseases (for example, pneumonia or tonsillitis). In this case, even after carrying out a full course of etiotropic and symptomatic therapy in a person for a long time (up to 6 weeks or more), a decrease in general tone, increased susceptibility to pathogens are observed;

• Immuno tone well suited for the treatment of arterial hypotension, for example in weather-dependent people;

• due to adaptogenic properties of prickly Eleutherococcus extract Immuno tone It can be used in the complex therapy of various neuroses and in menopausal syndrome (Adamczyk K., 2019);

• if the patient after one or several courses of antibiotic therapy disrupts the mechanisms of the immune response (imbalance of the intestinal and extraintestinal microflora, prolonged subfebrile condition);

• radioprotective properties of Eleutherococcus allow the drug to be used to recover after a course of radiation therapy (or other causes of acute or chronic radiation sickness).

To whom the Immuno-tone is contraindicated:

• because the Immuno tone is a multicomponent herbal preparation, it is contraindicated in patients who are allergic to complex plants (arnica, chamomile, calendula, etc.);

• because of its stimulating properties, the drug is an antagonist of all immunosuppressive drugs, therefore it is categorically contraindicated in autoimmune diseases (rheumatism, systemic lupus erythematosus, collagenoses), as well as after transplantation;

• Immuno tone significantly reduces the effects of sleeping pills, sedatives and antidepressants, therefore its use in psychiatry and neurology is limited;

• the drug is not intended for use in the acute period of the course of infectious or somatic diseases, as well as with exacerbations of chronic pathology;

• should not be used Immuno tone with blood diseases, especially oncological (leukemia);

• arterial hypertension of any origin is also a contraindication to use Immuno-tone. In addition, it cannot be used for heart rhythm disturbances, neurocirculatory dystonia, and also if the patient has a history of myocardial infarction;

• the drug is not prescribed during pregnancy and lactation, since its stimulating effect can cause unwanted effects in the child. For the same reason, the drug is contraindicated in children under the age of 12 years.

In this way, Immuno tone is a combined adaptogenic and immunostimulating drug, the effects of which are due to a combination of the active ingredients of Eleutherococcus, echinacea and St. Johns wort. Due to its mild stimulating effect on the nervous system, the drug is excellent for the correction of disorders that arise due to chronic stress or overwork. However, it must be understood that the optimal effect of the drug will be obtained only if it is combined with a change in lifestyle, adequate physical activity and a rational organization of the regime of work and rest.