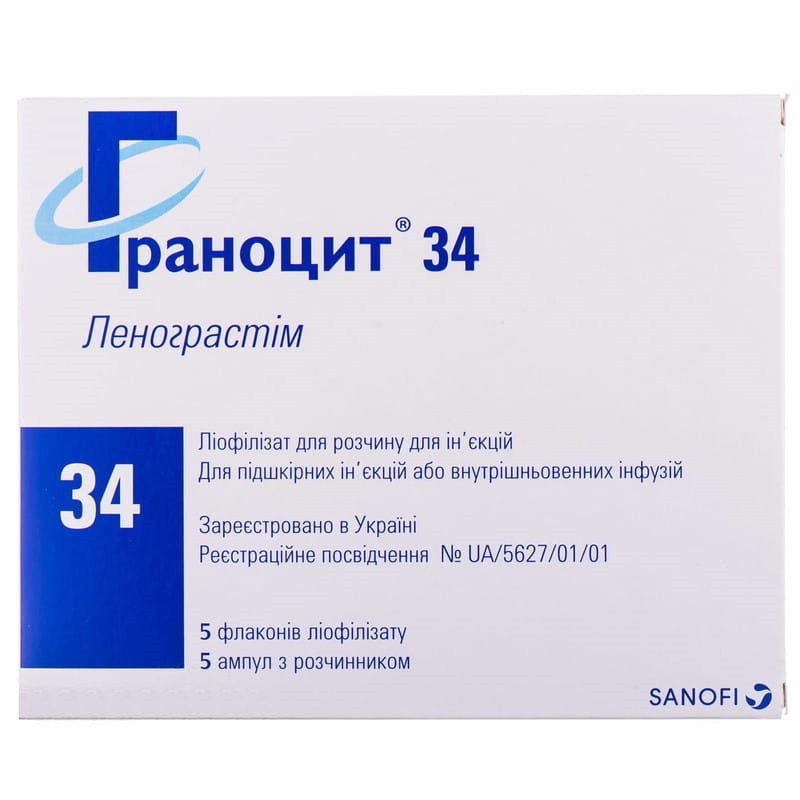 Lenograstim is a recombinant glycoprotein (rhug-csf), the equivalent of a human granulocyte colony stimulating factor isolated from human chu-2 cell culture. Lenograstim is a highly purified recombinant protein that consists of 174 amino acids and is glycosylated in the tr133 region. It belongs to the group of cytokines and has a stimulating effect on the cells that are the precursors of leukopoiesis. the drug causes a significant increase in the number of neutrophilic granulocytes in peripheral blood. the stimulating effect of the drug on granulocytopoiesis is dose-dependent and appears in the dose range from 1 to 10 μg / kg per day; repeated administration of the drug in recommended doses enhances this effect. neutrophilic granulocytes resulting from pharmacological stimulation have normal phagocytic properties and chemotaxis.

The use of Granocyte 34 leads to the mobilization of autologous progenitor stem cells (ASCP) into the peripheral blood, which can be separated and introduced to the patient after chemotherapy as an alternative to or in addition to bone marrow transplantation.

The reinfused ASKPs obtained after mobilization by Granocyte 34 restore hematopoiesis and shorten the graft engraftment period compared to autologous bone marrow transplantation. The use of Granocyte 34 in patients undergoing bone marrow transplantation or cytotoxic chemotherapy leads to a significant reduction in the duration of neutropenia and related complications.

The pharmacokinetics of the drug is dose-dependent: with repeated administration (iv or s / c), the maximum concentration in the blood plasma is directly proportional to the dose administered. Bioavailability with the introduction of the drug in recommended doses is 30%; distribution volume is about 1 l / kg. The elimination half-life is 3-4 hours, and upon reaching equilibrium plasma concentration with repeated IV infusions, it is reduced to 1-1.5 hours. A small amount of unchanged drug is excreted in the urine (less than 1%); it is believed that in the body it breaks down to peptides.

After chemotherapy, Granocyte 34 is used the day after the end of the course; administered daily s / c, after dissolving the contents of the vial in the supplied water for injection, until a stable normal number of neutrophilic granulocytes in the peripheral blood is reached. The duration of continuous use of the drug should not exceed 28 days.

Leukapheresis should be performed when an increase in the number of leukocytes is already noted, or after determining the level of cd34+-cells by the conventional method. For patients who have not been given prolonged chemotherapy, a single leukapheresis session is often sufficient to achieve an acceptable minimum, namely 2 · 106 cd34+-cells / kg.

When bone marrow transplantation, the drug is used the day after the procedure, is administered iv daily for 30 minutes until a stable normal number of neutrophilic granulocytes in the peripheral blood is reached.

To mobilize ASKP in the peripheral blood when using only Granocyte 34, the drug is administered daily s.c. at a dose of 10 μg (1,280,000 IU) / kg / day for 4-6 days. Leukapheresis should be carried out between the 5th and 7th day from the start of Granocyte administration 34. For patients who have not had long-term chemotherapy, one leukapheresis session is often enough to achieve an acceptable minimum, namely 2 · 106 cd34+-cells / kg.

When choosing a method of mobilization, it should be borne in mind that in clinical trials, the mobilization of ASKP was more effective in the case of Granocyte 34 after chemotherapy than with Granocyte 34 alone.

Preliminary use of cytotoxic drugs

In patients who underwent prolonged myelosuppressive therapy, an insufficient level of ASKP mobilization with an acceptable cell level (≥2.0 · 106 cd34+cells / kg) and adequate hematological restitution. In the patients treatment program, transplantation of ASKP should be provided in advance, paying particular attention to the number of ASKP mobilized. If their number is insignificant, you should abandon the planned transplantation of ASKP and apply an alternative method of treatment.

Determination of the number of mobilized ASKP

Particular attention should be paid to the method of calculating the mobilized ASKP, since the results of cytoflowmetric analysis of the amount of cd34 obtained in different laboratories+-cells may vary. Recommended Minimum (≥2.0 · 106 cd34+-cells / kg) is based on data obtained when an adequate hematological reconstitution is achieved.

Treatment with Granocyte 34 should be carried out only in the conditions of a hematological center and / or with the participation of an experienced oncologist-hematologist.

For chemotherapy-induced neutropenia: alopecia, nausea, vomiting, fever, headache. These symptoms are similar to those observed in patients with cancer, receiving chemotherapy. In patients who took Granocyte 34, there was a slight increase in the severity of symptoms such as bone pain and local reactions at the injection site.

When mobilizing ASAK: headache, bone pain, back pain, asthenia, abdominal pain, pain syndrome of a different localization. The risk of pain was increased in patients with high levels of white blood cells in the blood, especially when it was ≥50 · 109/ l Leukocytosis with a level of ≥50 · 109/ l was observed in 24% of donors, and thrombocytopenia associated with apheresis (platelets 100 · 109/ l) - in 42%. A transient increase in the activity of AlAT and / or AsAT, alkaline phosphatase was observed.

On the part of the immune system: very rarely - allergic reactions, including isolated cases of anaphylactic shock.

On the part of the respiratory system: pulmonary infiltrates were occasionally noted, in some cases with the development of respiratory failure and respiratory distress syndrome in adults (there may be a fatal outcome).

From the skin: very rarely - cutaneous vasculitis. Isolated cases of Sweet syndrome, erythema nodosum, and gangrenous pyoderma were noted. These cases have been primarily described in patients with hematologic malignancies - conditions that are known to be associated with neutrophilic dermatosis, but also in cases of neutropenia not associated with malignant neoplasms. Exceptional cases of Lyells syndrome have also been noted.

Laboratory indicators: cases of transient increase in LDH levels were noted very often. Usually, during the treatment with Lenograstim, cases of increased activity of AsAT, AlAT and / or alkaline phosphatase were observed. In most cases, functional disorders of the liver occurred after the abolition of lenograstim.

From the spleen: there have been several cases of development of splenomegaly and isolated cases of rupture of the spleen both in healthy donors and in patients who received G-CSF.

Caution should be exercised when prescribing the drug to patients with myelodysplastic syndrome and with all pre-tumor conditions of the myeloid germ of hematopoiesis.

Granocyte 34 should be administered no earlier than 24 hours after the last administration of the antitumor drug.

The efficacy and safety of Granocyte 34 in patients with severe renal or hepatic insufficiency has not been established.

In patients with a significantly reduced level of myeloid progenitor cells (for example, due to previous intensive radiation therapy or chemotherapy), the reaction of neutrophilic granulocytes is sometimes reduced and the safety of using Granocyte 34 has not been established.

The safety of the use of Granocyte 34 in the treatment of pregnant women has not been established, therefore, the possible risk to the fetus and the expected therapeutic effect of the drug for the mother should be correlated.

It is not known whether the drug passes into breast milk, so breastfeeding is not recommended during its use.

In children who underwent bone marrow transplantation, the safety and effectiveness of Granocyte 34 have been established for patients older than 2 years.

In healthy donors, apheresis should not be performed if the platelet count is below 75 · 109/ l

The safety of the use of granocyte 34 when using antitumor agents with cumulative or predominantly platelet toxicity (e.g. nitrosourea, mitomycin) has not been established.the introduction of granocyte 34 can increase the toxicity of these drugs, especially in relation to platelet germ blood.

The use of the drug at a dose of 40 mcg / kg per day did not cause the development of any toxic phenomena, with the exception of muscle and bone pain. symptomatic treatment.

At temperatures up to 25 ° c. do not freeze. in a diluted state, the drug retains its stability for 24 hours at room temperature.