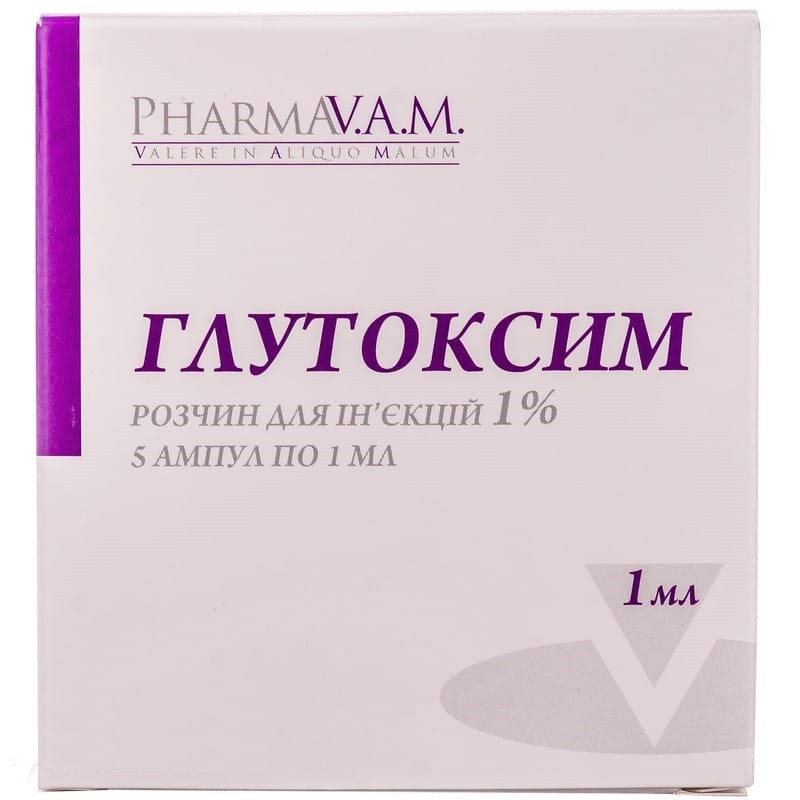 The immunomodulatory effect of the drug Glutoxim is due to receptor-mediated effects on the calcium-dependent signaling pathways of macrophages, which leads to an increase in:

The hemostatic effect of the drug Glutoxim is due to receptor-mediated increased bone marrow hematopoiesis: the processes of erythropoiesis, lymphopoiesis and granulocytomonocytopoiesis. The effect on the progenitor cells of various lines of blood cells is mediated by the functioning of the MAP and inositol kinase systems, which increases the resistance of hematopoietic cells that differentiate, restores their sensitivity to the action of endogenous factors of hematopoiesis.

Glutoxim initiates the reaction of the transformation of isoniazid (prodrugs) into a pharmacologically active form - isonicotinic acid, which has a bacteriostatic effect on Micobacterium tuberculosis, due to the negative transformation of the katG (catalase peroxidase gene) and inhA (phenol-APB reductase gene).

Glutoxim stimulates the exocytosis of vesicles from macrophages with intracellular parasitic microorganisms, including Micobacterium tuberculosis, ensuring their removal from the pharmacological storage and making antibacterial drugs available, including isoniazid, rifampicin, rifabutin, cycloserine, caprefomycin.

Glutoxim enhances the secretion of cationic peptides - defensins and catalecidins by macrophages, stimulates their absorption by tuberculosis mycobacteria, determining the mediated antibacterial effect of the drug.

Pharmacokinetics Glutoxim belongs to the group of natural metabolites, which determines the features of its metabolism by existing cellular enzymatic systems. After i / m, iv or s / c injection, bioavailability exceeds 90%. A linear relationship between the dose and the concentration of the drug in the blood plasma is noted. Cmax drug in blood plasma with a / in the introduction is achieved within 2-5 minutes, with a / m - within 7-10 minutes. As a natural peptide product, Glutoxim is metabolized in the organs and tissues of the body with elimination by the kidneys.

As a means of prevention and treatment in adults of secondary immunodeficiency conditions associated with radiation, chemical and infectious factors;

For prophylactic purposes, the drug is used IM 5-10 mg daily for 2 weeks.

If necessary, conduct a second course of treatment after 1-6 months.

The use of the drug is contraindicated in cases of individual hypersensitivity to the components of the drug.

In some patients, a slight increase in body temperature (up to 37.1–37.5 ° c), pain at the injection site of the drug can be noted. with poor subjective tolerance of pain, glutoxim is administered together with 1-2 ml of 0.5% Novocaine solution. in such cases, taking into account the safety information for the use of Novocaine, before using the drug, it is necessary to carefully collect an allergological history and make skin tests for compatibility.

Use during pregnancy or lactation. Do not use.

The ability to influence the reaction rate when driving vehicles or working with other mechanisms. Adverse effects not established.

Glutoxim reduces the therapeutic effect of nifedipine and verapamil.

Inhibitors of the cyclooxygenase pathway for the oxidation of arachidonic acid - indomethacin, meloxicam - reduce or completely suppress the pharmacological effect of the drug Glutoxim.

Incompatibility. Glutoxim can be administered in the same syringe with water-soluble drugs. The drug is compatible with solvents such as 0.9% sodium chloride solution or 5% glucose solution.

No cases of drug overdose have been reported.

In the dark place at a temperature of no higher than 25 ° c.