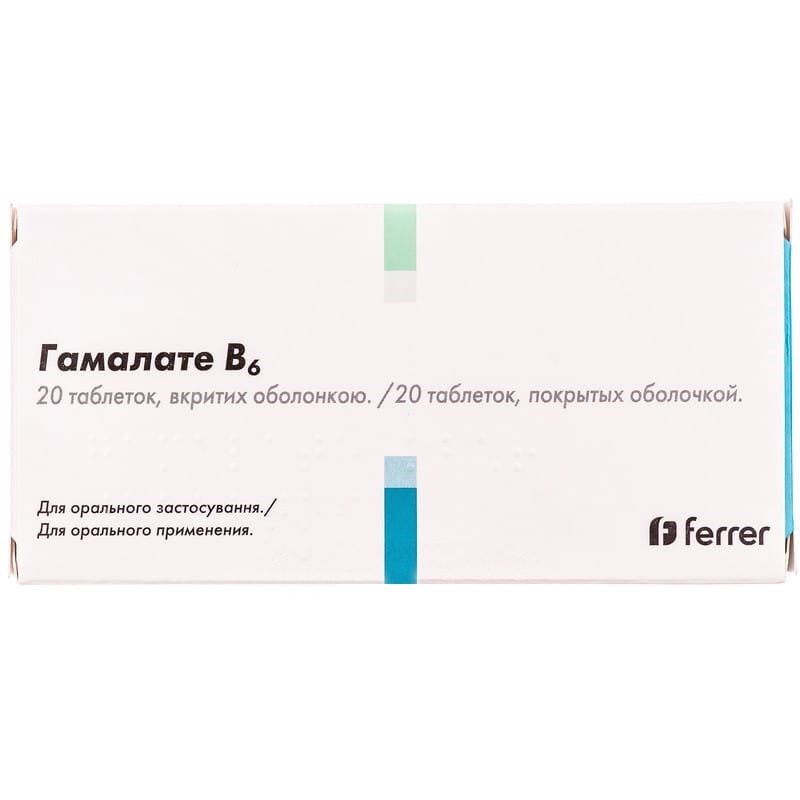 bamalate b6 contains a combination of active substances: gamma, amino-β-hydroxybutyric acid, vitamin b6 (pyridoxine hydrochloride), which are natural components of the brain tissue, and magnesium glutamate hydrobromide (mg). the drug has a neuroregulatory effect on processes in the brain, and causes mild sedative and cerebro-tonic effects.

GABA is formed in the brain due to the decarboxylation of glutamic acid. This reaction is catalyzed by the enzyme glutamine decarboxylase (HDA) and coenzyme - vitamin B6. The reaction produces amino-β-hydroxybutyric acid (GABOM). GABOM has an anticonvulsant effect, which is realized through the cholinergic mechanism, improves memory and learning ability.

Thus, the level of GABA in the central nervous system depends on the balance of the enzymes GDK and GABA-T.

In the event of a malfunction of the brain, inhibition occurs, which is associated with a decrease in the level of GABA - the main inhibitory neurotransmitter. Reception Gamalate B6 provides the exogenous entry of GABA into the nervous system, and a high level of GABA, in turn, provides the following effects:

MGH in its structure contains glutamic acid and a compound of magnesium with bromine in the form of a chelate. Thanks to the latter, MHG acts as a partial (partial) agonist of L-glutamate and causes a decrease in stimulation and a mild sedative effect. This distinguishes it from tranquilizers (benzodiazepines, barbiturates) with a direct inhibitory effect, which is associated with a high level of side effects that are not characteristic of MGH. Studies have shown the anticonvulsant activity of IGH, a positive effect in sleep disorders, neurovegetative changes and behavioral disorders in children. The calming effect of IGH is not associated with decreased attention and concentration.

Pharmacokinetics Gamalate B6 contains 4 components, 3 of which are physiological products (GABA, GABOB and vitamin B6) Classical pharmacokinetic studies in this case cannot be carried out because of the complexity of the quantitative determination of exogenous and endogenous components. Such a number of components of the drug also makes it impossible to conduct analysis using a radioactively labeled product due to the large radiological load.

It is prescribed to adults as an aid in functional asthenia with manifestations:

Applied in adults by mouth, 2 tablets 2-3 times a day.

The duration of treatment depends on the condition of the patient and the course of the disease and is 2-18 months.

Hypersensitivity to the components of the drug.

When used in high doses, dyspeptic disorders are possible, which disappear with dose adjustment.the appearance of allergic reactions is not excluded.

Children. In pediatric practice, a solution is used in the form of a solution for oral administration.

The ability to influence the reaction rate when driving vehicles and working with other mechanisms. Not described.

The drug has low toxicity, so the likelihood of intoxication is not provided.