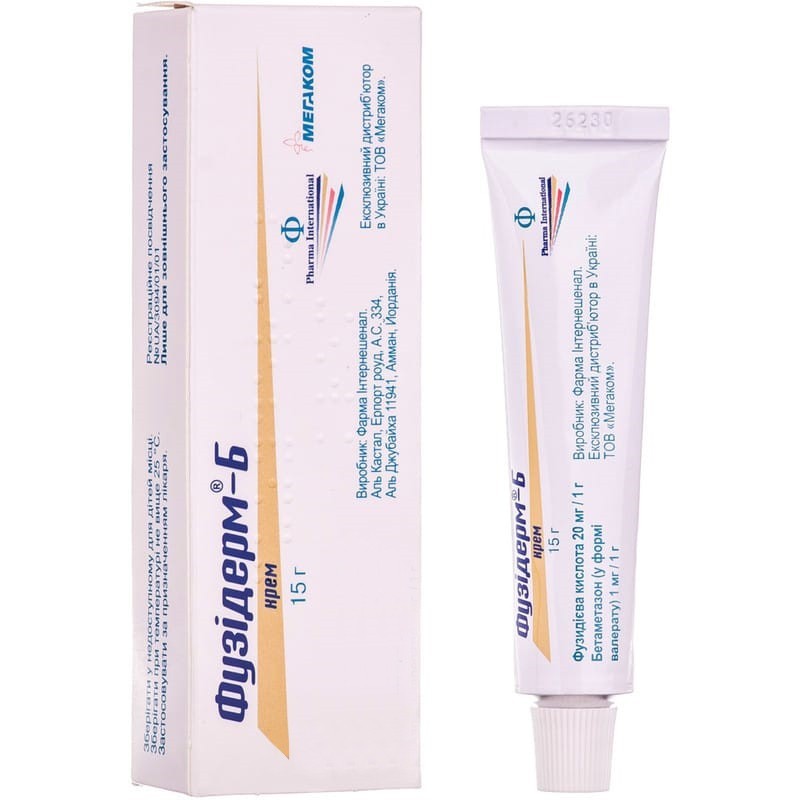 Fusiderm-b is a combined drug that combines the powerful antibacterial effect of fusidic acid and the local anti-inflammatory effect of betamethasone.

Pharmacodynamics Fusidic acid is an antibiotic obtained during the growth of Fusidium coccineum. It disrupts protein synthesis in a microbial cell, depending on the dose it acts bacteriostatically or bactericidal. It has a powerful antibacterial effect on a wide range of gram-positive microorganisms - Staphylococcus spp., Streptococcus spp., Corynebacterium minutissimum and Propionibacterium acnes and others, including staphylococci that are resistant to penicillin, streptomycin, and other chloramphenicol. Fusiderm-B has the ability to influence through intact skin. When applied topically, fusidic acid is active against Corynebacteria spp., Neisseria spp, Clostridia spp, Bacteroides spp.

Betamethasone - GCS for use in dermatology. When applied topically, it has a pronounced anti-inflammatory, antipyretic, anti-allergic and antiexudative effect, reduces the severity of itching and collagen synthesis in the skin.

Pharmacokinetics When applied topically, the systemic absorption of the drug components is negligible.

There is no data that would characterize the pharmacokinetics of the drug Fusiderm-B cream with topical application. However, some in vitro studies indicate that fusidic acid can penetrate intact human skin. The degree of absorption depends on the duration of exposure to fusidic acid and the condition of the skin. Fusidic acid is excreted mainly with bile and, to a lesser extent, with urine.

Betamethasone is absorbed after topical application. The degree of absorption depends on the place of application and the condition of the skin. Betamethasone is metabolized by the liver and, to a lesser extent, by the kidneys. Inactive metabolites are excreted mainly in the urine.

The cream is applied in a thin layer on exposed skin areas 2 times a day until a positive clinical result is achieved. you can apply the cream under a bandage, in this case, the drug is used 1-2 times a day. the duration of treatment is determined by the doctor individually, depending on the type and severity of the disease and is usually 1-2 weeks. do not recommend using the drug for more than 2 weeks.

Viral infections, including post-vaccination reactions, and chickenpox, viral skin infections (such as herpes simplex, shingles), rosacea, rosacea-like (perioral) dermatitis, bacterial dermatosis, including tuberculosis and syphilis of the skin, fungal diseases, skin infections scalp, infections of the skin and soft tissues, insensitive to fusidic acid, for example pseudomonas aeruginosa. hypersensitivity to the components of the drug.

The use of cream under occlusive dressings (gypsum) is not recommended.

Do not use Fusiderm-B Cream in the first trimester of pregnancy (see Use during Pregnancy and Breastfeeding).

Adverse reactions that can occur more often with the use of occlusive dressings: maceration of the skin, secondary infection, atrophy of the subcutaneous tissue, striae and sweating.

From the side of the organ of vision: conjunctival irritation, glaucoma attack.

General disorders: prolonged use of the drug in large areas of the skin or in children can cause a pronounced systemic effect, which manifests itself in the form of edema, hypertension, decreased immunity, inhibition of growth and development in children, hyperglycemia, glucosuria, the development of Cushings syndrome, inhibition of the pituitary and adrenal glands.

Avoid prolonged use of the drug in large quantities or applying it to large areas of the skin, especially for children and infants, as this can lead to hypercorticism (Cushings syndrome) due to significant systemic absorption. this phenomenon is most likely when using an occlusive dressing. in infants, diapers act like an occlusive dressing. inhibition of the function of the pituitary and adrenal glands is reversible with a quick normalization of the state after interruption of steroid therapy.

Due to the risk of suppression of adrenocortical function, continuous treatment for longer than 7 days should be avoided, especially in children under 4 years of age.

Prolonged and intensive treatment with active corticosteroids can cause atrophic changes in the skin (atrophic striae, thinning of the skin and expansion of the superficial blood vessels), especially when using an occlusive dressing. The use of the drug Fusiderm-B under occlusive dressings (gypsum, etc.) is not recommended.

Avoid the use of the drug for skin atrophy, cracks, ulcers, acne, perianal and genital itching.

Sudden cessation of treatment may cause a relapse of symptoms.

If hypersensitivity reactions occur, the use of the drug should be stopped immediately.

During treatment with contagious impetigo, do not remove the crust before applying the cream. If necessary, you can make an incision and drainage of the infected skin lesion before starting the use of the drug Fusiderm-B.

Avoid getting the drug on the mucous membrane.

Fusiderm-B is not intended for use in ophthalmology.

Apply the drug to the skin around the eyes with caution, avoiding the cream in the eyes, as this can cause conjunctival irritation or an attack of glaucoma.

In the presence of infection, antifungal or antibacterial agents, respectively, are required. If at the same time the desired effect does not occur quickly, the use of corticosteroids must be discontinued until the signs of infection are eliminated.

If the bacterial infection persists, systemic chemotherapy with antibiotics is required.

Bacterial resistance has been reported with topical administration of fusidic acid. As with all topical antibiotics, prolonged and repeated use of the drug Fusiderm-B may increase the risk of contact sensitization and the development of the bodys resistance to antibiotics.

Local hypersensitivity reactions may resemble the symptoms of a disease that is being treated.

In case of development of oppression of the hypothalamic-pituitary-adrenal system (GGNS), the drug should be canceled, the frequency of application should be reduced or the patient transferred to a weak-acting corticosteroids.

Use during pregnancy and lactation. Since the safety of the use of local corticosteroids in pregnant women has not been established, the drug should not be used in the first trimester of pregnancy. The appointment of the drug is possible only in late pregnancy, if the expected benefit for the expectant mother clearly exceeds the potential threat to the fetus. Preparations of this group should not be used by pregnant women in large areas, in large quantities, for long periods, as well as under occlusive dressings.

Children. Avoid prolonged use of the drug in large quantities or applying it to large areas of the skin. Since in children the ratio of surface area to body weight is greater than in adults, active absorption of the drug is observed. Therefore, children are more prone to the development of inhibition of GNH function due to the use of corticosteroids and the development of exogenous effects of corticosteroids.

In children receiving topical corticosteroids, inhibition of adrenal function, Cushings syndrome, growth retardation, insufficient weight gain, increased intracranial pressure were noted. Manifestations of adrenal suppression in children: low levels of cortisol in blood plasma and lack of response to ACTH stimulation. An increase in intracranial pressure is manifested by protrusion of the fontanel, headache, bilateral edema of the optic disc.

The ability to influence the reaction rate when driving vehicles or other mechanisms. Not described.

Due to the presence of white soft paraffin and mineral lung oil as excipients, treatment with fusiderm-b cream in the anogenital region can damage the structure of latex condoms and reduce their safety when used during treatment.

Excessive or prolonged use of local corticosteroids can lead to inhibition of GFV function, which can cause the development of secondary adrenal cortex insufficiency, which, as a rule, is reversible. in such cases, symptomatic treatment is indicated.