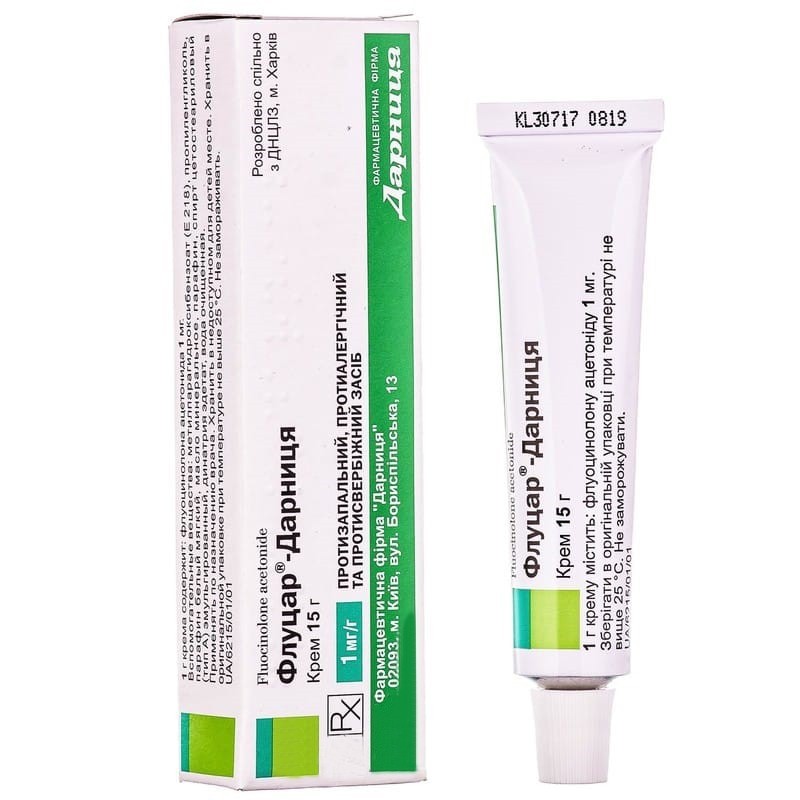 the mechanism of action is to reduce the severity of inflammatory processes by inhibiting the production of prostaglandins and leukotrienes due to inhibition of phospholipase a2 activity and a decrease in the release of arachidonic acid from cell wall phospholipids.

The antiallergic effect is to inhibit the development of local allergic reactions.

Due to the local vasoconstrictor action, the drug reduces protein synthesis, collagen deposition, accelerates the breakdown of proteins in the skin and inhibits proliferative processes. It inhibits the proper cell division, therefore it is used in the treatment of keloids and psoriasis.

By stimulating steroid receptors, the drug promotes the formation of lipocortin proteins, which have an anti-edematous effect.

The absorption of fluocinolone acetonide through the skin is enhanced by applying to the sensitive skin a portion of the anatomical folds of the body and face, as well as on the skin with a damaged epidermis or inflammatory process. The use of an occlusive dressing causes an increase in skin temperature and humidity, which also leads to increased absorption of fluocinolone acetonide. In addition, absorption is enhanced with frequent use of the drug and in large areas of the skin.

Absorption through the skin is higher in children than in adults.

After absorption (absorption of not more than 1%) through the skin, the drug is metabolized mainly in the liver.

Slight absorption of the drug does not have a systemic effect and does not inhibit the function of the adrenal cortex. The use of occlusive dressings significantly increases bioavailability, which can lead to the development of general resorption effects characteristic of fluorinated corticosteroids.

It is excreted in the urine and in an insignificant amount with bile in the form of conjugates of glucuronides in an unchanged form.

The drug is intended for topical use.

Adults and children over the age of 16 years: the drug is applied 1-2 times a day with a thin layer on the affected area, gently rubbing into the skin. The maximum duration of treatment is no more than 10 days, on the skin of the face - no longer than 1 week.

Caution should be exercised, under the supervision of a physician, use the drug for children aged 16 and over only 1 time per day on a small area of ​​the skin; Do not apply on the face of the child.

Do not use the drug under an occlusive dressing. Only in case of psoriasis is it allowed to use a closed dressing, which should be changed every day.

From the side of the organ of vision: with external use on the skin of the eyelids, cataracts or glaucoma can sometimes develop.

On the part of the immune system: maculopapular rashes, urticaria, inflammation of the hair follicles, secondary immunodeficiency (exacerbation of chronic infectious diseases, generalization of the infectious process, the development of opportunistic infections).

With prolonged use on large areas of the skin, systemic side effects are possible: edema, hypertension, development or exacerbation of chronic gastritis, steroid ulcers of the stomach, hyperglycemia, glucosuria, slowing of reparative processes, adrenal insufficiency, inhibition of growth and development in children, Itsenko-Cushings syndrome.

Treatment must be carried out under the supervision of a physician.

The drug is used only in short courses (do not use continuously for more than 10 days) in small areas of the skin. With prolonged use on large areas of the skin, the incidence of side effects and the possibility of developing edema, hypertension, hyperglycemia, and a decrease in resistance increase.

Before each repeated application of the drug, the remnants of the old drug should be washed off with a warm soapy solution or antiseptic solution. It is recommended that you wear loose clothing during treatment.

Use with caution on parts of the body with thin skin (face, inguinal regions, axillary hollows), since increased absorption and a high risk of side effects (telangiectasia, perioral dermatitis) are possible, even after short-term use.

Do not use on the skin of the mammary glands.

Do not use the cream at the same time as other medicines for external use.

If skin irritation occurs at the place of application of the cream, it should be canceled.

In case of infection at the place of application of the cream, appropriate antibacterial or antifungal treatment should be carried out.

With external use of the drug, the following are possible: a decrease in the production of ACTH by the pituitary gland due to inhibition of the hypothalamic-pituitary-adrenal system, a decrease in the level of cortisol in the blood, and the development of iatrogenic Cushings syndrome, which disappears after drug withdrawal.

Use the drug with caution in patients with psoriasis, since topical application of corticosteroids in areas affected by psoriasis can lead to the spread of relapse caused by the development of tolerance, the risk of generalized pustular psoriasis and systemic toxicity caused by skin dysfunction.

Use the drug with caution in the presence of atrophy of the subcutaneous tissue, especially in the elderly.

Avoid applying the drug to the eyelids or skin around the eyes of patients with angle-closure and open-angle glaucoma, as well as cataracts due to a possible increase in the severity of the symptoms of the disease.

During treatment, vaccination against smallpox is not recommended, as well as other types of immunization.

Children. The drug is not used in children under the age of 16 years.

The ability to influence the speed of reactions when driving vehicles and working with other mechanisms. Does not affect

The drug can be used with antimicrobial agents of local and systemic action.

The combined use of systemic action with GCS increases the effectiveness of the drug Flutsar-Darnitsa, but at the same time, the likelihood of side effects increases.

The combined use of the drug with NSAIDs increases the risk of developing systemic and local side effects.

Diuretic drugs (except potassium-sparing) increase the likelihood of hypokalemia.

Insignificant absorption of the drug Flutsar-Darnitsa with external use does not cause interaction with other drugs.

During treatment with the drug, it is not recommended to be vaccinated against smallpox, as well as to carry out other types of immunization (especially with prolonged use on large areas of the skin) due to the possible lack of an adequate immunological response in the form of the production of the corresponding antibodies.

With prolonged use on large areas of the skin, systemic manifestations of an overdose may appear, manifested by increased side effects.

Symptoms: edema, hypertension, hyperglycemia, glucosuria, hypersensitivity to infections, and in severe cases - Itsenko-Cushings syndrome; local - itching, burning of the skin at the site of application of the drug.

In the original packaging at a temperature not exceeding 25 ° C. do not freeze.