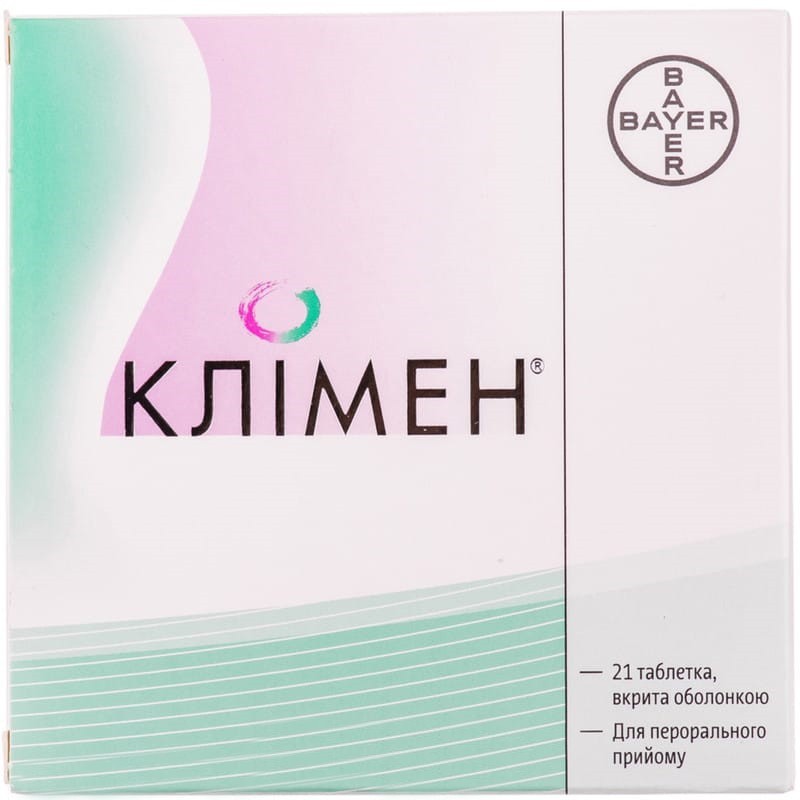 Klimen refers to combined biphasic estrogen-progestogen hormonal preparations intended for the prevention and treatment of complications of the menopause and estrogen deficiency. the preparation contains estrogen - estradiol valerate, which is a prodrug of natural human 17 β-estradiol and cyproterone acetate - a synthetic derivative of hydroxyprogesterone with progestogen, antigonadotropic and antiandrogenic properties.

The composition and cyclic regimen of the use of the drug, which includes taking estrogen only for 11 days and an estrogen-progestogen combination for 10 days with a further 7-day break in therapy, causes a woman to recover the menstrual cycle in a woman with an unexplained uterus (subject to regular use of the drug).

While taking Klymene, ovulation is not inhibited, but there is a significant effect on the endogenous production of hormones. Due to the fact that Klimen is a drug for cyclic therapy, it can be used by young patients to establish and regulate the cycle, as well as by women in the perimenopausal period for the treatment of irregular bleeding.

With the onset of the menopause, the decrease, and then the cessation of estrogen synthesis in the ovaries, can lead to a violation of thermoregulation. This contributes to the appearance of hot flashes, combined with sleep disturbances and increased sweating. There are signs of involution of the skin and mucous membranes (especially in the genital area). Less specific, but often noted as components of the climacteric syndrome, are such symptoms: complaints of angina pectoris, a feeling of a strong heartbeat, irritability, nervousness, loss of strength and decreased ability to concentrate, forgetfulness, loss of libido, pain in joints and muscles. Hormone replacement therapy (HRT) minimizes most of these symptoms due to estradiol deficiency in women during menopause.

In addition, the anti-androgenic properties of cyproterone acetate determine the positive effect of Klymene on androgen-dependent complications (for example, acne, seborrhea, androgenetic alopecia).

HRT with the use of Klymene changes the lipid profile. The drug reduces the level of total cholesterol and LDL cholesterol and can increase the levels of HDL cholesterol and triglycerides. Due to the lack of androgenic properties in cyproterone acetate, it does not counteract the metabolic effects of estrogen. It was revealed that these positive effects are especially pronounced in women with significant changes in the direction of atherogenic lipoproteins.

Estradiol Valerate is rapidly and completely absorbed.The steroidal ester is cleaved into estradiol and valerianic acid during adsorption and first passage through the liver. At the same time, estradiol passes the further path of metabolism - to estrone, estriol and estrone sulfate. Only about 3% of estradiol is bioavailable after oral administration of the drug. Eating does not affect the bioavailability of estradiol.

The metabolism of exogenously administered estradiol valerate occurs in the same way as endogenous estradiol. Estradiol is mainly metabolized in the liver, as well as outside it (for example, in the intestines, kidneys, skeletal muscles and target organs).

Estradiol metabolites are excreted mainly in the form of sulfates and glucuronides in the urine.

Serum estradiol levels are 2 times higher after repeated use than after a single dose. After taking Klymene, the levels of estradiol and estrone noted at the beginning of treatment are restored for the next 2-3 days.

After oral administration of cyproterone, acetate is rapidly and completely absorbed. Its absolute bioavailability is about 88% of the dose taken.

After a single dose of 1 mg, the maximum concentration of cyproterone acetate in the blood plasma (about 8 ng / ml) is reached in about 1-2 hours. Subsequently, the concentration of the drug in the plasma decreases two-phase with a half-life of 0.8 hours and 2.3 days.

Cyproterone acetate is almost completely bound to plasma albumin. About 3.5–4% of the total concentration of the hormone remains unbound.

There are various ways of metabolizing cyproterone acetate, including hydroxylation and conjugation. The main plasma metabolite is the 15β-hydroxy derivative.

Given the long half-life of cyproterone acetate from blood serum, its cumulation in blood serum can be noted during one cycle of therapy with a coefficient of 2–2.5.

Data from standard preclinical toxicity studies with repeated use of cyproterone acetate do not indicate the existence of a specific risk to humans.

Recognized tests for the genotoxicity of cyproterone acetate were initially negative. However, the results of further tests indicate that cyproterone acetate has the ability to form adducts with DNA, which leads to an increase in DNA repair in liver cells.

At this time, clinical experience and the results of epidemiological studies do not give reason to allow an increase in the incidence of liver tumors in humans. The carcinogenicity studies of cyproterone acetate carried out in rodents do not indicate the existence of any specific carcinogenic effect. However, sex steroids can promote the growth of certain hormone-dependent tissues and tumors.

The intake of high doses of cyproterone acetate in the hormone-sensitive phase of the differentiation of the genitals leads to the appearance of female sexual characteristics in male fetuses. Observation of newborn boys who in utero experienced the effects of cyproterone acetate did not reveal the development of any female sexual characteristics. Nevertheless, taking Klymene is contraindicated during pregnancy.

According to existing data, there are no contraindications regarding the use of the drug Klimen in people with strict adherence to the instructions for its use and recommended doses.

HRT for menopausal symptoms, signs of involution of the skin and urogenital tract, depressive states in the menopause, hormone deficiency symptoms due to natural menopause or hypogonadism, castration or primary ovarian failure in women with an unexplained uterus.

Regulation of the menstrual cycle.

Treatment of primary and secondary amenorrhea.

In the event that menstruation occurs very rarely, with amenorrhea or in the postmenopausal period, Klymene dragee can be started at any time, provided that pregnancy is excluded.

Doses One white tablet is taken daily for the first 11 days, then one pink tablet daily for the next 10 days. After the 21st day of taking Klimen, a 7-day break in treatment is provided.

Take dragees without chewing with a small amount of liquid. It is advisable to adhere to the selected time of day.

Missed jelly beans. Missed tablets should be taken as soon as possible. If the delay in taking the dragee is more than 24 hours, an additional dragee should not be taken. If you skip a few drops, bleeding may begin.

Menstrual bleeding usually occurs during a 7-day break in treatment, within a few days after taking the last dragee.

HRT should not begin in any of the following conditions. if any of these conditions occurs during HRT, the drug should be stopped immediately:

During pregnancy and breastfeeding;

identified pre-tumor conditions or malignant tumors that are dependent on sex steroids, or if they are suspected;

diagnosed liver tumors (benign or malignant) or their history;

exacerbation of deep vein thrombosis, current thromboembolic disorders or history of such diseases.

information about hypersensitivity to active substances or to any of the components of the drug.

The most serious side effects associated with the use of HRT are indicated in the special instructions section.

The table shows data on other undesirable effects recorded in women receiving HRT (post-marketing data), but for which the relationship with the use of the drug Klimen was not reliably confirmed.

Klimen is not used as a contraceptive.

If necessary, non-hormonal methods of contraception are used, with the exception of calendar and temperature. If pregnancy is suspected, the drug should be discontinued before the final exclusion of pregnancy.

Before starting HRT, in assessing the risk / benefit of treatment, taking into account the individual characteristics of each patient, the following conditions / risk factors should be taken into account.

The use of HRT should be stopped immediately if any of the contraindications are detected, as well as in the presence of the following conditions and diseases:

migraine-like or frequent and unusually severe headache, appearing for the first time, or other symptoms that are likely prodromal signs of cerebral vascular occlusion;

relapse of cholestatic jaundice or cholestatic itching, first noted during pregnancy or previous use of sex steroids;

symptoms of thrombotic disorders or suspicion of their occurrence.

In the event of a relapse or exacerbation of any of the following diseases or risk factors, it is recommended to re-conduct an individual analysis of the ratio of benefit and risk of therapy, taking into account the possible need for discontinuation of treatment.

The results of epidemiological and randomized controlled trials suggest that there is an increase in the relative risk of developing VTE, i.e. deep vein thrombosis, or pulmonary embolism. As a result, when consulting women with HRT for women with a risk factor for developing VTE, the ratio of risk and benefit of the treatment should be carefully weighed.

Commonly recognized risk factors for the development of VTE include: personal and family history (the case of VTE in a close relative at a relatively young age may indicate a genetic tendency), severe obesity. The risk of VTE also increases with age. The question of the possible role of varicose veins in the development of VTE remains controversial.

The risk of VTE may temporarily increase with prolonged immobilization, after a serious planned or emergency surgery or severe injury. The question of the temporary cessation of HRT should be decided depending on the nature of the surgical intervention and the duration of the immobilization.

The results of two clinical trials using a combination of conjugated equin estrogens and medroxyprogesterone acetate (MPA) in a continuous mode indicate a possible increase in the risk of developing coronary heart disease during the first year of their use, and subsequently, with continued treatment, the risk remains constant. The results of a clinical study showed a potential reduction in the incidence of coronary heart disease in women aged 50–59 years who underwent estrogen monotherapy. Another negative factor was an increase in risk of 30–40% of the development of stroke during monotherapy with estrogens or their use in combination with MPA.

Estrogens increase the lithogenicity of bile. Some women have a tendency to gallbladder disease during estrogen treatment.

Based on clinical studies using HRT drugs, it has not been proven that taking hormones increases the risk of dementia in treating women 65 years of age or older. The risk can be reduced by starting treatment for HRT in early menopausal women.