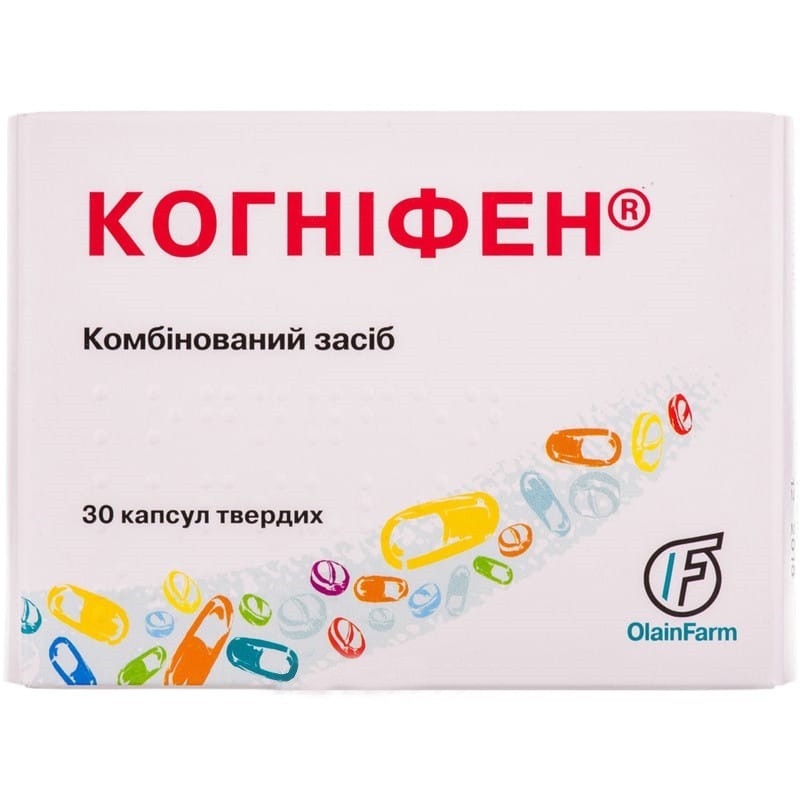 Cognifen is a combined drug containing phenibut (γ-amino-β-phenylbutyric acid hydrochloride) and ipidacrine, which combines the properties of a nootropic and anticholinesterase drug.

The drug restores and stabilizes the impaired integrative functions of the brain, balances the activating and depriminating mechanisms of brain functioning.

Cognifen optimizes the energy processes of the brain, thereby contributing to an increase in the resistance of the central nervous system to hypoxia and toxic factors.

Cognifen is a combined drug whose pharmacotherapeutic effect is due to the properties of its components.

Phenibut (γ-amino-β-phenylbutyric acid hydrochloride) is a derivative of GABA and phenylethylamine. Its main mechanism of action is a direct effect on GABA-mediated transmission of nerve impulses to the central nervous system. It improves the functional state of the brain due to the normalization of tissue metabolism and effects on cerebral circulation (increases the volumetric and linear velocity of cerebral blood flow, reduces the resistance of cerebral vessels, improves microcirculation, and has an antiplatelet effect). The dominant is its antihypoxic and antiamnestic effect. Phenibut stimulates learning processes and improves memory, increases physical performance, eliminates stress, anxiety, fear and improves sleep.

Phenibut significantly reduces the manifestations of asthenia and the severity of vasovegetative symptoms, including headache, a feeling of heaviness in the head, sleep disturbances, irritability, emotional lability, and increases mental performance. Psychological indicators (attention, memory, speed and accuracy of sensory-motor reactions) under the influence of phenibut improve. In patients with asthenia and emotionally labile patients, from the first days of taking phenibut, their health improves, their interest and initiative increase, and their activity motivation without a sedative effect or arousal. It was established that phenibut, used after a traumatic brain injury, increased the number of mitochondria perifocally and improved brain bioenergetics. Although phenibut does not affect cholinergic, adrenergic, and other types of neuromediation, ipidacrine has this effect.

Ipidacrine is the second active pharmaceutical ingredient of the Cognifen preparation and constitutes a biologically beneficial combination of two molecular effects: blockade of potassium permeability of the membrane of neurons and muscle cells and reversible inhibition of cholinesterase in synapses, directly stimulates the effect on impulse conduction in the central nervous system and myoneural synapses. The decisive role is played by the blockade of potassium permeability of the membrane. In cholinergic synapses, inhibition of cholinesterase causes a further accumulation of the neurotransmitter in the synaptic cleft and an increase in the functional activity of the postsynaptic cell (excitation between neurons, muscle contraction). Ipidacrine enhances the effect on smooth muscles not only of acetylcholine, but also of adrenaline, serotonin, histamine and oxytocin.It also blocks the sodium permeability of the membrane, although significantly weaker than the effect on potassium permeability. Particularly related to this effect is the presence of weak sedative and analgesic properties in ipidacrine. Thus, ipidacrine acts on all links in the chain of processes that ensure excitation: increased activity of the presynaptic axon, increased release of the mediator in the synaptic cleft in all synapses, increased stimulation of the postsynaptic cell.

Ipidacrine has the following pharmacological effects: restores and stimulates neuromuscular transmission; resumes impulse conduction in the central and peripheral nervous system; enhances contractility of smooth muscle organs under the influence of all antagonists, with the exception of potassium chloride, improves memory and learning ability; inhibits the progressive development of dementia; specifically moderately stimulates the central nervous system, exhibits an analgesic effect; has an antiarrhythmic effect.

The combination of the properties of both active substances causes an increase in the cognitive functions of the brain due to the effect on the GABAergic, cholinergic and dopaminergic system of the brain.

Pharmacokinetics Phenibut is well absorbed after oral administration and quickly enters all tissues of the body, penetrates the BBB. The distribution in the liver and kidneys is close to uniform, and in the brain and blood it is below uniform. The highest binding of phenibut occurs in the liver (80%), it is not specific. It is metabolized by hepatocytes by 80–95%, metabolites are pharmacologically inactive. After 3 hours, a noticeable amount of injected phenibut is determined in the urine, while the concentration in the brain tissue does not decrease, it is determined in the brain after another 6 hours. The next day, phenibut can be detected only in the urine; it is determined there another 2 days after administration, but the detected amount is only 5% of the administered dose. With the repeated introduction of cumulation is not marked.

Ipidacrine is rapidly absorbed after administration. Cmax in the blood is determined 1 hour after administration. Ipidacrine is absorbed mainly in the duodenum, slightly less in the small and ileum, only 3% of the dose is absorbed in the stomach. About 40–50% of ipidacrine binds to blood proteins. From the blood, ipidacrine quickly enters the tissues, so only 2% of the drug is detected in the blood plasma at the stabilization stage. The elimination of ipidacrine from the body is carried out through a combination of renal and extrarenal mechanisms (biotransformation, secretion with bile), with urine secretion predominant. Only 3.7% of ipidacrine is excreted unchanged in the urine, which indicates its rapid metabolism in the body. T½ in the distribution phase is 40 minutes

The simultaneous pharmacokinetics of phenibut and ipidacrine have not been studied.

Diseases of the nervous system with a weakening of intellectual-mnestic functions:

The capsule is taken orally with water. the capsule cannot be chewed. take after meals.

The drug is prescribed 1 capsule 2-3 times a day. The course of treatment is 30 days.

Hypersensitivity to the drug and its components.epilepsy, extrapyramidal disorders with hyperkinesis, angina pectoris, severe bradycardia, BA, mechanical obstruction of the intestine and urinary tract, gastric and duodenal ulcer in the acute stage, rel.

From the respiratory system: increased secretion of bronchial secretions, bronchospasm.

From the alimentary canal: salivation; nausea, vomiting (when used in high doses); diarrhea, pain in the epigastric region.

On the part of the skin and subcutaneous tissues: increased sweating, after taking in high doses, allergic reactions are possible (urticaria, angioedema, itching, rash).

These adverse reactions are typical for doses exceeding the recommended dose by 4 times.

Use during pregnancy and lactation. ipidacrine, which is part of the drug cognogn, increases the tone of the muscles of the uterus and can lead to premature labor, therefore it is not recommended to use the drug during pregnancy.

During breastfeeding is contraindicated.

Children. There is no experience with the use of the drug in children, so the use is contraindicated.

When used with psychotropic drugs - tranquilizers and antipsychotics - the action is mutually enhanced.

With simultaneous use with cholinesterase inhibitors and M-cholinomimetic agents, their effect and side effects may be enhanced.

The risk of developing bradycardia increases if β-adrenergic receptor blockers were used before starting treatment with Cognifen.

It is undesirable to drink alcohol during treatment.

Cases of overdose are unknown.

At a temperature not exceeding 25 ° C.