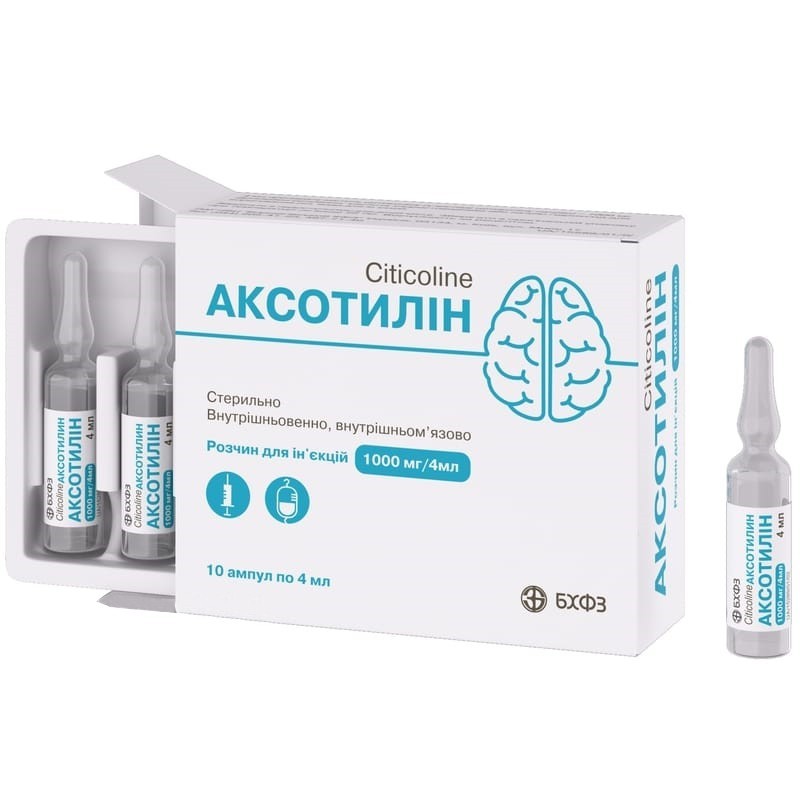 citicoline stimulates the biosynthesis of structural phospholipids of neuronal membranes. citicoline improves the functioning of such membrane mechanisms as ion pumps and neuroreceptors, without the regulation of which normal conduction of nerve impulses is impossible. Due to the stabilizing effect on the membrane of neurons, citicoline exhibits decongestant effects that contribute to the reabsorption of cerebral edema.

Citicoline inhibits the activation of certain phospholipases (A1, A2, C and D), reducing the formation of free radicals, prevents the destruction of membrane systems and preserves antioxidant defense systems, such as glutathione.

Citicoline significantly increases functional recovery in patients with acute cerebrovascular accident, which coincides with a slowdown in the growth of ischemic brain damage according to neuroimaging data.

In patients with traumatic brain injury, citicoline accelerates recovery and reduces the duration and intensity of post-traumatic syndrome.

Citicoline improves the level of attention and consciousness, helps to reduce the severity of amnesia, cognitive and neurological disorders associated with cerebral ischemia.

Pharmacokinetics After administration of the drug, a significant increase in the level of choline in the blood plasma is observed. The drug is metabolized in the intestines and liver with the formation of choline and cytidine.

After administration, citicoline is widely distributed in brain structures with the rapid incorporation of the choline fraction into structural phospholipids and the cytidine fraction into cytidine nucleotides and nucleic acids. In the brain, citicoline integrates into cell, cytoplasmic and mitochondrial membranes, integrating into the structure of the phospholipid fraction.

Only a small amount of dose is determined in urine and feces (3%). About 12% is excreted through CO2 exhaled air. During excretion of the drug with urine, two phases are distinguished: the first phase within 36 hours, in which the excretion rate decreases rapidly, and the second phase, in which the excretion rate decreases much more slowly. The same phase is observed when excreted through the respiratory tract. CO elimination rate2 decreases rapidly, for about 15 hours, then decreases much more slowly.

The recommended adult dose is 500–2000 mg / day, depending on the severity of the symptoms.

IV drug can be prescribed as a slow injection (within 3-5 minutes, depending on the dose) or IV drip (40-60 drops per minute).

The treatment period depends on the severity of the disease and is set individually by the doctor.

This injection solution is intended for single use. The drug must be administered immediately after opening the ampoule. Unused solution should be destroyed.

The drug is compatible with all iv iv isotonic solutions, as well as with hypertonic glucose solutions.

If necessary, treatment is continued with the drug in the form of a solution for oral administration.

Hypersensitivity to the components of the drug. increased tone of the parasympathetic nervous system.

In case of intravenous administration, the drug must be administered slowly (for 3-5 minutes, depending on the administered dose).

In the case of IV drip, the infusion rate should be 40-60 drops per minute.

With sustained intracranial hemorrhage, the dose of 1000 mg / day and the speed of iv infusion (30 drops per minute) should not be exceeded.

Use during pregnancy and lactation. There are no sufficient data on the use of citicoline in pregnant women. Data on the penetration of citicoline into breast milk and its effect on the fetus are unknown. During pregnancy or lactation, the drug should be prescribed only when the expected benefit to the mother outweighs the risk to the fetus or child.

Children. Experience with the drug in children is limited.

The ability to influence the reaction rate when driving vehicles or other mechanisms. In individual cases, some adverse reactions from the central nervous system can affect the ability to drive vehicles and work with complex mechanisms.

Do not use the drug simultaneously with drugs containing meclofenoxate.

Enhances the effect of levodopa.

Incompatibility. Do not use solvents not specified in the APPLICATION section.

No cases of overdose have been reported.

In the original packaging at a temperature not exceeding 25 ° C.