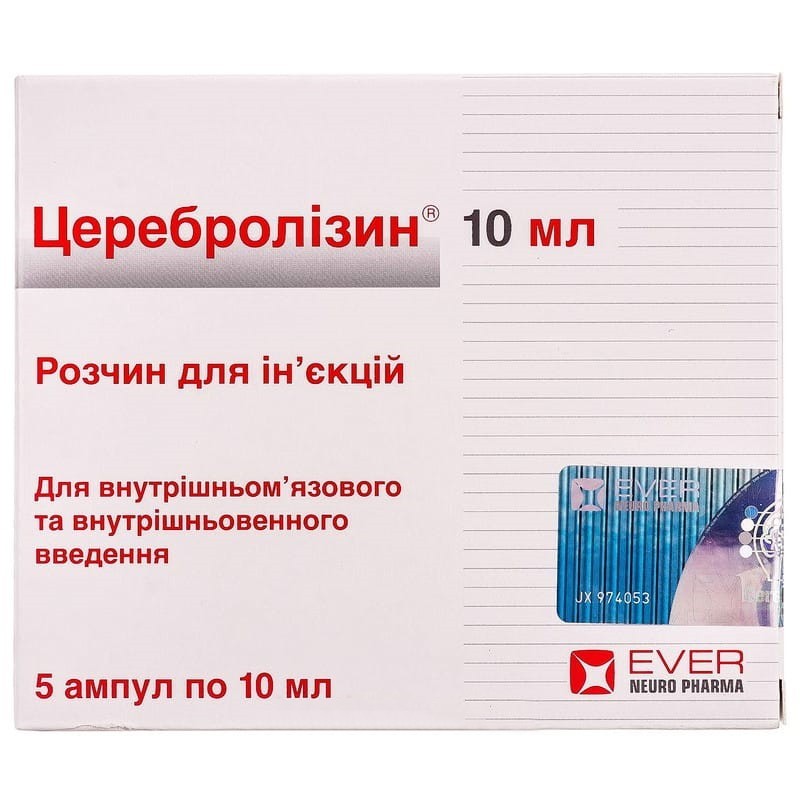 cerebrolysin - a proteolytic peptide fraction obtained from the brain of pigs, stimulates differentiation and improves the function of nerve cells, activates defense and recovery mechanisms. animal experiments have shown that cerebrolysin has a direct effect on neuronal and synaptic plasticity, which contributes to the improvement of cognitive functions. this has been demonstrated in young, adult, and old animals with reduced learning ability. in experiments with models of cerebral ischemia, cerebrolysin reduced the volume of a heart attack, prevented the formation of edema, stabilized microcirculation, normalized neurological and cognitive impairment, and doubled survival rates. Positive results were obtained during studies with models of Alzheimers disease. in addition to the direct effect on neurons, cerebrolysin significantly increased the number of molecules that transport glucose through the GEB, thus compensating for the critical energy deficiency noted in this disease.

Quantitative EEG analysis of healthy volunteers and patients with vascular dementia showed a significant dose-dependent increase in neuronal activity (increase in the frequencies of α and β rhythms) after 4 weeks of treatment with Cerebrolysin. Regardless of the cause of the disease, with Alzheimers type neurodegenerative dementia or with vascular dementia, after treatment with Cerebrolysin, patients objectively improved cognitive function and self-care ability. Clinically noticeable improvement in the condition of patients was noted after 2 weeks of treatment with Cerebrolysin and increased with continued therapy. A positive effect after treatment with Cerebrolysin was observed in 60–70% of patients, regardless of the type of dementia. In the case of senile dementia of the Alzheimers type, the improvement in the clinical condition of patients continued after the end of active therapy. This was especially true for long-term improvement in the ability to carry out daily activities, as a result of which the need for outside help and supervision is reduced. Due to neurotrophic activity (similar to the action of the nerve growth factor), Cerebrolysin can significantly slow down, and in some cases stop the progression of neurodegenerative processes.

High molecular weight peptides with antigenic potential are removed from the preparation during production.

Studies have not revealed the effect of the drug on the immune system. Experiments have shown that cerebrolysin does not cause the formation of antibodies or anaphylactic reactions. Cerebrolysin does not stimulate histamine receptors and does not affect erythrocyte hemagglutination.

Pharmacokinetics Since the proteolytic peptide fraction obtained from the brain of pigs contains biologically active peptides that are similar or identical to those produced endogenously, it has not yet been possible to directly determine the pharmacokinetic parameters of the drug Cerebrolysin. Indirect pharmacokinetic data were obtained on the basis of studying the pharmacodynamic profile of the drug. After a single injection, the neurotrophic activity of the drug Cerebrolysin in the blood plasma appears for almost 24 hours. The components of the drug can penetrate the BBB. In preclinical in vivo experiments, an identical pharmacodynamic effect of the drug on the central nervous system was established with intracerebroventricular and peripheral administration. This is indirect evidence that the components of the drug penetrate the BBB.

After dilution with 0.9% sodium chloride solution (9 mg NaCl / ml), Ringers solution (Na+ 153.98 mmol / L, Ca2+ 2.74 mmol / L, K+ 4.02 mmol / L, Cl– 163.48 mmol / L) or 5% glucose solution. The infusion solution is physically and chemically stable for 24 hours when stored at room temperature in a place unprotected from light. From a microbiological point of view, the solution for infusion must be administered immediately after preparation.

The optimal recommended duration of treatment is 10-20 days of daily administration of the drug.

One-time administration in a dose of up to 50 ml is possible, but course therapy is more effective.

The effectiveness of therapy increases with repeated courses. Treatment is continued until an improvement in the patients condition is noted. After the initial course, the frequency of administration of the drug can be reduced to 2-3 times a week. Between courses of therapy, it is necessary to take breaks lasting no less than such a course of treatment.

Instructions for medical staff. With the introduction of the drug Cerebrolysin through a permanent IV catheter, the latter must be washed with 0.9% sodium chloride solution before and after drug infusion. Collect the drug from the ampoule / vial immediately before use. Only a single intake of the drug from the ampoule / vial is allowed. You can use only transparent solutions of amber color.

Hypersensitivity to the components of the drug, epilepsy, severe renal impairment.

The following are the undesirable effects and reactions observed during clinical studies and post-marketing observations, regardless of whether there is a causal relationship with cerebrolysin therapy (the drug is used to treat mainly elderly people, and these symptoms are often noted in this category of patients).

On the part of the skin and subcutaneous tissues: rarely (1/10 000 - 1/1000) - with very rapid administration, a sensation of heat, increased sweating, itching, rash (including maculopapular), urticaria, and redness of the skin are possible.

Particular caution is necessary when prescribing cerebrolysin in patients with allergic diathesis.

Although there is no evidence that cerebrolysin may increase the burden on the kidneys, the drug should not be administered to patients with severe renal failure.

Use during pregnancy and lactation. Animal studies have not shown reproductive toxicity of the drug. However, data on the effect of the drug on human reproductive function are not available. Cerebrolysin can only be used after a careful assessment of the ratio of the expected benefits to the mother and the potential risk to the fetus / child. At the time of use of the drug, breast-feeding should be discontinued.

Children. The drug is used in pediatric practice if there are reasonable indications.

Given the pharmacological profile of the drug cerebrolysin, special attention should be paid to possible additive effects if it is used simultaneously with antidepressants or MAO inhibitors. in such cases, it is recommended to reduce the dose of antidepressants.

Cerebrolysin should not be mixed with balanced solutions of amino acids in a single infusion bottle.

The simultaneous use of the drug Cerebrolysin with vitamins and drugs that affect the cardiovascular system is allowed, but they should not be mixed in the same syringe.

Cerebrolysin should not be mixed with balanced solutions of amino acids, vitamins and cardiovascular drugs in one infusion bottle.

There were no cases of intoxication or negative health effects due to an overdose of the drug cerebrolysin.

In the original packaging at a temperature not exceeding 25 ° C. do not freeze!