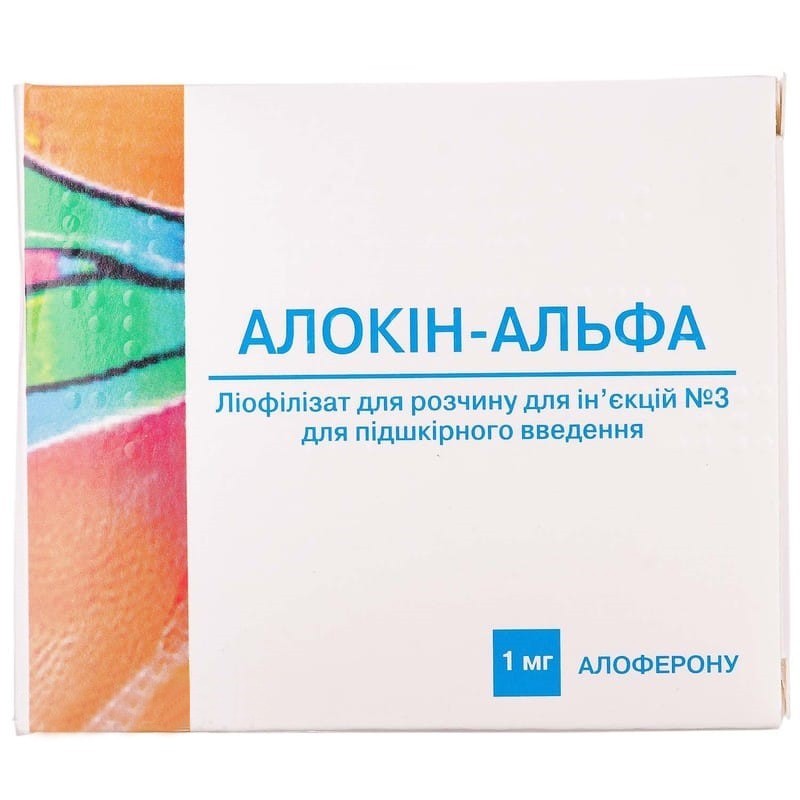 alloferon is an oligopeptide. alloferon is an effective inducer of the synthesis of endogenous α- and γ-interferons and an activator of the natural killer system. the agent stimulates the recognition and lysis of defective cells by cytotoxic lymphocytes. In the course of studies, a high efficacy of the drug was revealed with respect to infections caused by influenza a and b viruses, hepatitis B, herpes and human papillomas. alloferon does not cause general toxicity, allergic reactions, does not have a mutagenic, carcinogenic and embryotoxic effect, does not affect reproductive function.

Pharmacokinetics It quickly penetrates the bloodstream, where it interacts with immunocompetent cells, after which the determination of the concentration of alloferon is difficult due to the close structural similarity of its metabolites with blood serum proteins. An increase in the concentration of interferon was observed 2 hours after the administration of the drug and remained at a high level (2–2.5 times higher than the usual background) for 6–8 hours with the initial values ​​reaching the end of the day. Increased functional activity of natural killers was noted within 7 days after administration of the drug.

As part of complex therapy of recurrent herpes of types i and ii; acute viral hepatitis (mild to moderate).

The drug is administered sc. To prepare a solution for injection, 0.9% sodium chloride solution is used as a solvent. when sc administration of the drug, use 1 ml of solvent.

Hepatitis. In the treatment of acute hepatitis B of mild to moderate severity, the drug is administered after confirmation of the diagnosis at a dose of 1 mg 3 times a week for 3 weeks (a total of 9 injections).

Hypersensitivity to the drug, autoimmune diseases.

Allergic reactions including rash; weakness, dizziness; the formation of new elements of the rash (with herpetic infection), changes in the injection site.

Treatment is recommended to begin when the first signs of the disease appear, with hepatitis B - no later than the 7th day from the onset of symptoms of jaundice.

In acute hepatitis B, the drug should be prescribed during conventional basic therapy.

In the treatment of chronic recurrent genital herpes, it can be prescribed in combination with antiviral drugs.

In monotherapy, it is recommended to use for the treatment of human papillomavirus infection caused by oncogenic types of the virus in the absence of clinical and subclinical lesions of the cervix and anogenital area.

As part of complex therapy - for the treatment of clinical and subclinical forms of lesions of the cervix and the anogenital area of ​​human papillomavirus infection caused by oncogenic types of the virus.

Children. The drug is contraindicated in children.

Incompatibility with other drugs is unlikely, however, the drug should be prescribed with caution along with other immunomodulators. in the treatment of chronic recurrent genital herpes, it can be prescribed in combination with acyclovir and its derivatives (drugs have a different mechanism of action and complement each other in the treatment of viral infection). in acute hepatitis, the drug is prescribed against the background of generally accepted basic therapy.

Cases of drug overdose have not been established.

In the dark place at a temperature of no higher than 8 ° C. do not freeze.